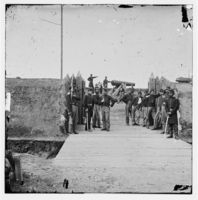 On the Far North end of CUA's campus (behind Marist Hall), on a slight knoll now covered with trees stands the former site of Fort Slemmer, a Civil War Fort. Established on land seized by the government, Fort Slemmer was built on the highest Hill of farmland owned by E.J. Middleton. The fort was named after Lt. Adam Slemmer, a Pennsylvanian who distinguished himself as a defender of Fort Pickens in Florida. It doesn't look like much now, and in fact it was a smaller fort with only four guns that did not see any action during the war. It had a perimeter of only 93 yards, and contained three 32 pound guns and a mounted 8 inch cannon.

When Union forces cleared the trees off of the hill and surrounding area, they could literally see to the Potomac! Their strategy was to issue early warnings and to muster troops as quickly as possible. Fort Slemmer, like the other forts in the Civil War city, was built to defend the Capital from Confederate forces in Virginia and Maryland. All of the forts in the area were located close enough for a runner to deliver a message at the first sight of the enemy. Traces of some earthworks barely discernable in the undergrowth are all that remain of the Fort today. However, a few stray bullets have been found at the site.

Soldiers from several units operated this fort, chief among them the 2nd Pennsylvania Heavy Artillery. Troops here mostly drilled and maintained the camp. Only one of the sixty-eight fortifications around the city actually saw battle during the war, and that was Fort Stevens, two miles away (in what is now the Northwest DC neighborhood Brightwood). Relationships between Union forces and landowners were not always harmonious.

Area residents Mr. Middleton and his neighbor Colonel Jehiel Brooks (Yes, of Colonel Brooks Tavern fame!) had their land seized and their trees cut down. They also had to contend with more than a hundred rowdy soldiers living nearby. These heavy artillery soldiers were famous for their hard-drinking and neighborhood foraging; of course, one person's "foraging" can be interpreted by another as "looting," particularly if it was your chickens and pigs that were thus "appropriated."

As it turns out, the only combat seen around Fort Slemmer was among the Union troops themselves, usually in the form of drunken brawls. The troops gained quite a reputation after running off their quiet chaplain, the Rev. John Hassler. The new chaplain, Rev. Thomas Hunt, made one of his first orders of business to put a stop to the artillerymen's swearing. Father Hunt then went to work to bring an end to the soldiers' reckless behavior and encouraged their families to live in permanent camps near the regiment.

Many of the men left the fort in June, 1863, when Robert E. Lee's forces invaded their own home state of Pennsylvania. They served in Gettysburg anonymously and were deemed deserters on the Fort Slemmer Muster rolls. 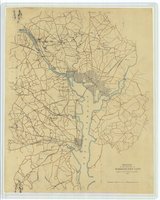 ← 1803: The Smith and Middleton Families
Next Page:

The University's Founding and Early Years →