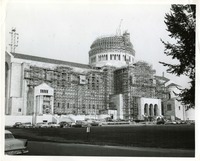 Cardinal Gibbons blessed the foundation stone of the Shrine on September 23, 1920 with over 10,000 people gathered to watch.  The massive granite block came from a quarry in Milford, New Hampshire. As he gave the blessing, he circled the stone, touching each side with a silver trowel.  At one point the shrine was conceived in the gothic style (much like the National Cathedral), but instead was built incorporating Byzantine and Romanesque styles.

The crypt church opened in 1924 (completed in 1926), and remained that way for 3 decades, due to funding difficulties that prevented the building of the rest of the basilica. The Great Depression and then the Second World War delayed construction until 1953 when the U.S. bishops renewed the effort to build the great upper church of the Shrine.

Catholics in every parish in the U.S. responded to the fundraising effort in 1954 and in that year construction resumed.  The names engraved on the walls and columns on the crypt level reveal the efforts of American Catholics to see the constructing of this national Catholic basilica through to its completion. These names, as well as their location, certainly reflect that community served as the foundation (both figuratively and physically) of this building. The dedication mass for the upper church took place on November 20, 1959.

In the decades that followed, the many chapels of the Shrine were added, each reflecting an aspect of the religious and cultural heritage of America brought by generations of immigrants.  The upper church measures 459 feet long and covers 77,500 square feet and can accommodate 6,000 worshippers.  The crypt stretches 200 feet and seats 400. The tower rises to 329 feet. The Shrine is the largest Catholic Church building in the U.S. and in North America, and one of the ten largest churches in the world. 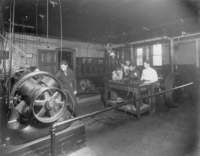 ← Into the Present
Next Page: