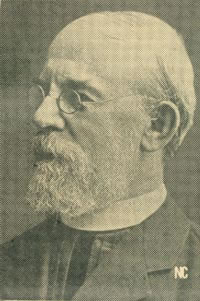 An orphan raised by relatives in Brookline, Massachusetts, George Searle received B.A. and M.A. degrees from Harvard University. He first calculated charts for the United States Ephemeris and Nautical Almanac, then worked with the astronomer Benjamin A. Gould at Dudley Observatory, Albany, New York and at the U.S. Coast Survey, Cambridge, Massachusetts. He discovered the asteroid Pandora in 1858. Between 1862 and 1864 he taught mathematics at the U.S. Naval Academy in Newport, Rhode Island. Following this, as an assistant at the Harvard University Observatory, he began what would become a long professional association with Samuel P. Langley. In 1868 he entered the Missionary Priests of St. Paul the Apostle and remained at the order's headquarters in New York until 1889 when he went to the newly-established Paulist house at the Catholic University of America. At Catholic University he lectured in mathematics and astronomy, directed the observatory, and was awarded a Ph.D. in 1896. His experiments on the resistance and trajectories of projectiles led to the invention of a rangefinder for the U.S. Navy. Between 1904 and 1909 he was fourth superior general of his congregation and then served as Newman club chaplain at the University of California, Berkeley. Between 1900 and 1911, Searle was associated with the Smithsonian Institution and participated in several scientific expeditions including the May 1900 expedition to Wadesboro, North Carolina to observe the total eclipse for which he operated the field cameras. His computation of the orbit and reappearance of Halley's comet in 1910 was considered definitive by American astronomers. He designed the ceiling of the Paulist mother church with its depiction of the stars and planets as they were positioned on January 25, 1885, the night of the church's dedication.