American Catholic History Classroom > Exhibits > Thomism Through Time: 1400s to the Present > Background > The Life of a Saint

The Life of a Saint 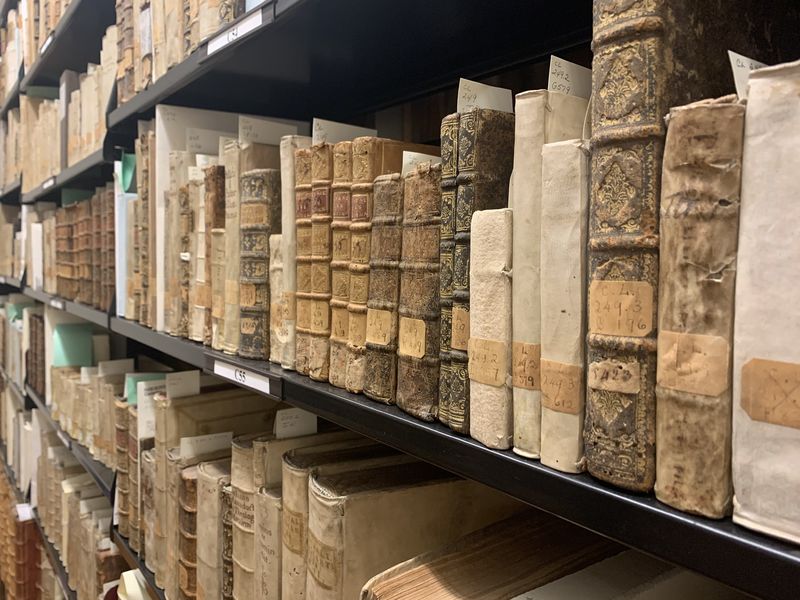 He never wasted any time in idleness or worldly occupations but was always either reading, writing, dictating, praying, or preaching.

Putting St. Thomas into his correct historical context and providing a brief sketch of his life will be essential to discussing his works and the objects within this exhibit. He was most likely born in 1224 or 1225 (as there is no record of the specific day he was born) in Roccasecca, Italy, where his father, Landulf, was the powerful Count of Aquino. St. Thomas came from a large family, with 7-8 siblings (the exact number is debatable). We do know that his brothers and sisters will factor heavily into his story, but first we must begin with young Tammaso’s education.

Sent at the tender age of 5 years old to Monte Cassino, he began his studies at the powerful and illustrious Benedictine monastery. It was quite common for the youngest son of powerful families to enter religious life, more for strategic glory than the salvation of one’s soul. James A. Weisheipl, O.P. writes, “Landulf and Theodora had made careful plans for the future of the family; Thomas, it was hoped, would become abbot of Monte Cassino.”[1] This never did come to fruition, as Thomas had other ideas, namely to become a Dominican friar instead of continuing on his family’s prescribed path towards becoming a Benedictine monk.

(It is, at this point, important to point out the differences between the Orders. The Benedictines were established in 529 by St. Benedict in Subiaco, Italy, and it is a monastic order, meaning that the monks and nuns live enclosed within the walls of their monasteries. This is in contrast to the Dominican Order, formally know as the Order of Preachers, which was established by St. Dominic in 1216. The Dominicans are a mendicant religious order, which means their friars go out into the world to preach.)

Before this was to happen though, Thomas was sent to the University of Naples to continue his studies in 1239, at that moment still a Benedictine (it should be pointed out that he was not professed, but an oblate of the order). It was in Naples that Thomas became acquainted with Aristotle in his studies and with the Dominican Friars in the city.[2] This was a time of essential formation for Thomas in the ways of medieval scholasticism: “One of the basic rules accepted in early medieval scholasticism was that each student had to be enrolled under an individual master who was responsible not only for the intellectual development of the youth, but also for his moral and habits.”[3] As mentioned above, it was in Naples, at the Priory of San Domenico, that Thomas received the Dominican habit, but we are not entirely sure the exact date. After being received as a novice, it was necessary for Thomas to continue his studies in Paris, as his fellow friars and the Master General were concerned that his family would try to put a stop to his formation.[4]

On his way to Paris his brothers kidnapped him and brought him back to their family estate. For more than a year Thomas was forced to be apart from his Order, but time was not spent in vain, as he dedicated every day to prayer and study. "During this period the Aquino family did everything to persuade him to go along with family plans. Nothing could persuade him to abandon his Dominican vocation or to change his mind about ecclesiastical preferments."[5]

Seeing that he would not be deterred, his mother eventually let him leave in 1245 and he continued on his journey: “And the friars had horses ready waiting to take Thomas to Rome. Thence he went to Cologne, to brother Albert…”[6] He continued his studies and began to teach in Cologne under St. Albert the Great, a fellow Doctor of the Church. His studies advanced in Paris, where he received his degree of Master.[7] Thomas taught and wrote for three years before being reassigned to Italy - it was during this time that he completed some of his major works, namely Summa Contra Gentiles and the Office for Corpus Christi.[8] The most important of his writings also began in Italy, in the newly formed studium of Santa Sabina, the headquarters of the Order of Preachers. It was here that Thomas began to write the Summa Theologiae, which he would, unfortunately, not finish.

Thomas was sent back to Paris to teach in 1268 and he remained there until 1272. Weisheipl points out that “During the next four years Thomas worked with incredible speed and accuracy with the help of his secretaries.”[9] His time at the University of Paris was interrupted by a charge from the Order for Thomas to establish a new studium, anywhere he wished, and he chose Naples. In Naples, Thomas continued his work on the Summa and served as regent master. No doubt all of these accomplishments and his work as the papal theologian inspired Pope Gregory X to invite Thomas to attend the Second Council of Lyon, an attempt at reconciliation between the Roman Catholic Church and the Eastern Orthodox Church.[10] On his way to the Council, Thomas fell ill and stayed at the Cistercian monastery at Fossanova with several of his Dominican brothers, including his assistant Reginald (who was his steadfast companion and secretary through the years).

In A Letter of the Faculty of Arts in the University of Paris to the General Chapter of the Order of Preachers at Lyons in 1274, it was reported to his brothers that Thomas had died after his illness in Fossanova: “This report - which we have no choice but to accept as true, coming, as it does, from many sources and with complete assurance- this news which wrings a cry from our lips though we know not what to cry... is that the venerated Master, brother Thomas of Aquino, has been called for ever out of this world.”[11] St. Thomas Aquinas died on March 7th, 1274 in the monastery of St. Mary at Fossanova. His writings, deep piety, and miracles secured his place amongst the Communion of Saints, and he was canonized on July 18th, 1323.

[11] “A letter of the Faculty of Arts in the University of Paris to the General Chapter of the Order of Preachers at Lyons in 1274,” 153.