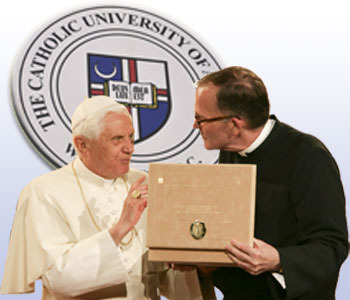 While the official planning for the papal visit began in November of last year, it was in August that Rev. David M. O’Connell, C.M., President of The Catholic University of America first learned that Pope Benedict XVI would be visiting campus. It was from an unexpected phone call from the Embassy of the Apostolic Nunciature of the Holy See in Washington, DC that Father O’Connell was notified that the Pope would deliver an important address on Catholic Education on CUA’s campus in April. Shortly after this discussion, Father O’Connell began organizing the preparations for the papal visit.