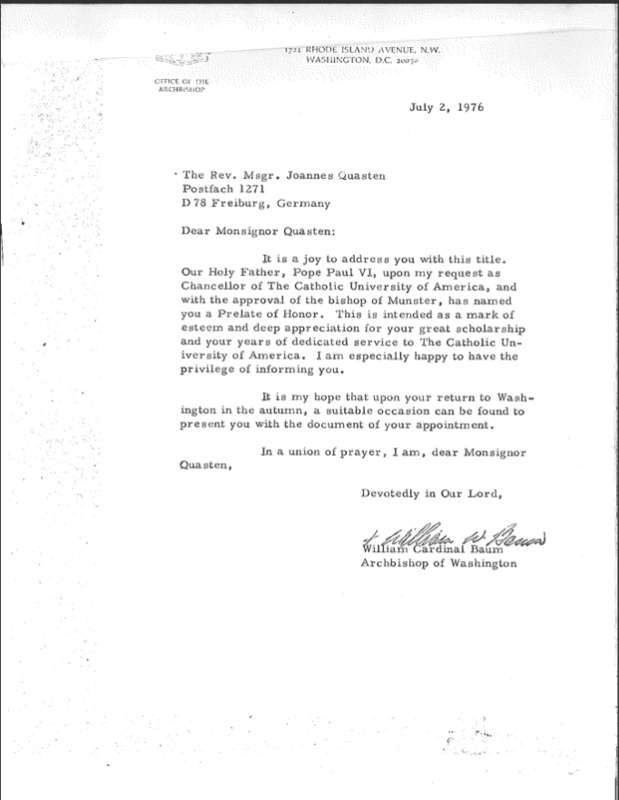 The letter from the Archbishop of Washington congratulating Msgr. Quasten on becoming a Prelate of Honor in 1976.

Originally from Homberg-Niederrhein, Germany, Johannes was born on May 3, 1900 to Wilhelm and Sibyl Quasten. He attended the Gymnasium Adolfinum in Moers am Rhein from 1914 to 1921. Following his formative education, Quasten moved on to the University of Muenster in Westphalia. This is where he earned his Doctor of Theology, focusing on Christian archaeology, in 1927. It was during his time at the University of Muenster that Johannes Quasten became Father Quasten, the scholar having been ordained into the priesthood in 1926 as a diocesan priest.

Father Quasten became Monsignor Quasten on July 2, 1976 by approval of Pope Paul VI at the recommendation of William Cardinal Baum, the Archbishop of Washington. Furthering his specialization in archaeology, he went on to study at the Pontifical Institute of Christian Archaeology in Rome until 1929.

Time at The Catholic University of America →