Writings and work outside The Catholic University of America 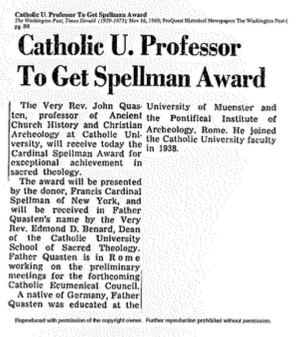 Msgr. Quasten was awarded the prestigious Spellman Award in 1960.

Throughout his years of producing scholarship, Msgr. Quasten wrote hundreds of articles, pamphlets and book reviews. He wrote a massive three-volume work dedicated to the study of early Christian literature titled Patrology, which is considered his magnum opus. In recognition of his scholarly works, Msgr. Quasten received the “1960 Cardinal Spellman Medal for distinguished achievement in sacred theology”[1]. At the time that he received the Cardinal Spellman Medal, he was involved in the preparatory meetings leading up to the Second Vatican Council.

← Time at The Catholic University of America
Next Page: