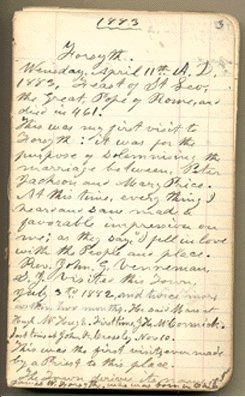 Diary/Accounts #23, 1888 © Dept. of Archives, Manuscripts, and Museum Collections, The Catholic University of America

This was my first visit to Forsyth: it was for the purpose of Solemnising the marriage between Peter Jackson and Mary Price. At this time, every thing I heard and saw made a favorable impression on me; as they say, “i fell in love with the People and place.” Rev. John J Benneman, S.J. visted this town July 5th 1882 and twice more within two months. He said Mass at Camp Ft. Keogh. First time, JH McCormick, last time at John M. Cressly Nov. 10. This was the first visit ever made by a Priest to this place.

Rev. Lindesmith became a military chaplain in 1880. Stationed in Montana, Lindesmith carried with him from Ohio the same drive to serve the Catholic population under his care. He continued to urge moral living. He stressed the importance of temperance among the soldiers and civilian population. In his record books and diaries, Lindesmith documented the numerous sacraments he performed and sermons he gave in his eleven year stay in the west.

The following list from Lindesmith’s diary, “Second Book, Miles City,” shows typical sermons he gave while in Montana. The list not only shows the subjects he covered, but it also illustrates the importance Lindesmith placed on preserving a written history of his experiences. 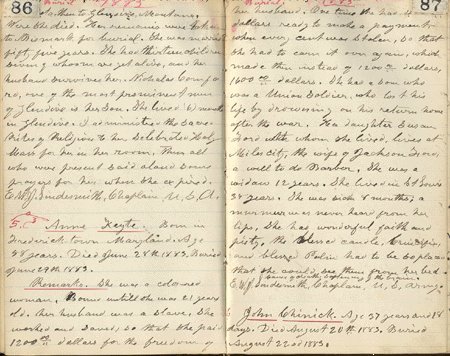 Lindesmith, when recording services he conducted, such as the funeral of Anne Keyte in 1883, also remarked on the individual's life and family. Here again, Lindesmith was conscious of history.

Remarks. She was a colored woman. Bound until she was 21 years old. Her husband was a slave. She worked and saved so that she paid 1200 dollars for the freedom of her husband. One time she had 4 hundred dollars ready to make a payment when every cent was stolen. So that she had to earn it over again, which made then instead of 1200 dollars, 1600 dollars. she had a boy who was a Union Soldier, who lost his life by drowning on his return home after the war. Her daughter Susan Lord with whom she lived, lives at Miles City, the wife of Jackson Lord, a well to do Barber. She was a widow 12 years. She lives in St. Louis 35 years. She was sick 8 months; a murmur was never heard from her lips. she has wonderful faith and piety. The blessed candle, Cruicifix, and blessed Palm had to be so placed that she could see them from her bed. Cause of death, suffering of the brain.