A Brief But Fiery Rise 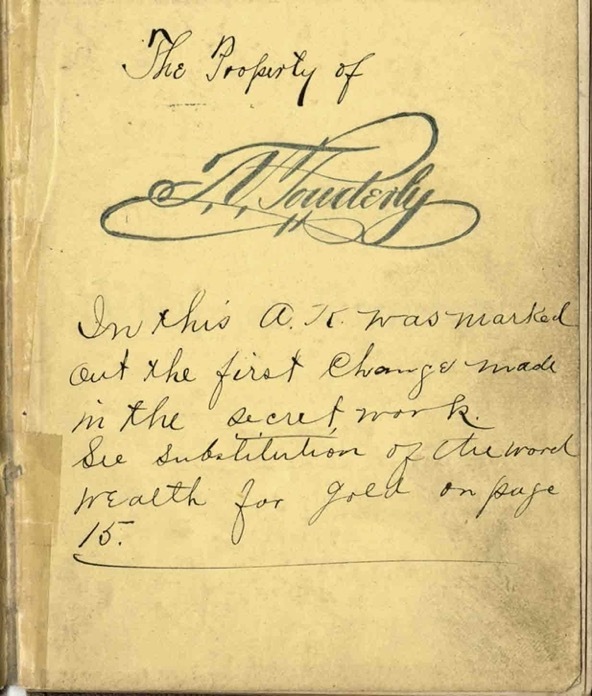 Terence Powderly’s signed copy of Adelphon Kruptos, the secret ritual manual of the Knights of Labor. Powderly and Order leadership modified some of the language to better reflect the Order’s goals and to it make it more palatable to members of the Catholic hierarchy. 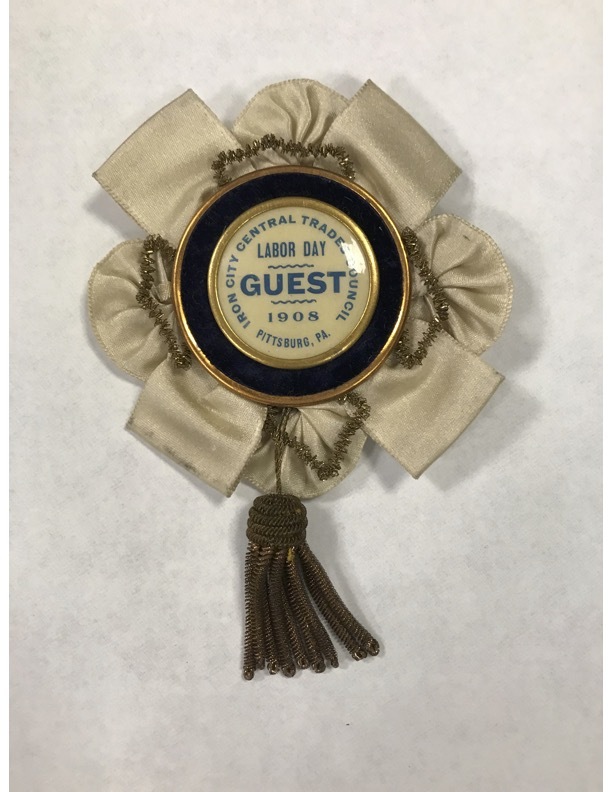 The Powderly Papers contain hundreds of pins, badges, and other paraphernalia related to labor union organizing such as this Labor Day badge, ca 1908. 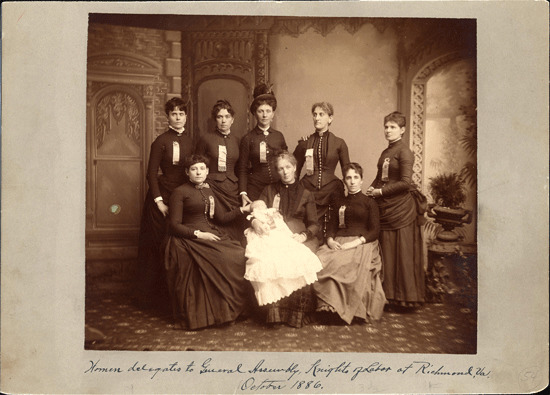 The Knights of Labor were more inclusive than previous unions, which were often organized by craft, or only allowed white men to join. The Knights included many ethnicities, including Blacks, and women, though these were usually segregated units within the Union.

However, the Knights, including Powderly himself, used racially discriminatory arguments to exclude Chinese immigrants from the Knights and he supported national Chinese exclusion laws. Powderly maintained these views as Commissioner General of Immigration, a post to which he was appointed in 1897. 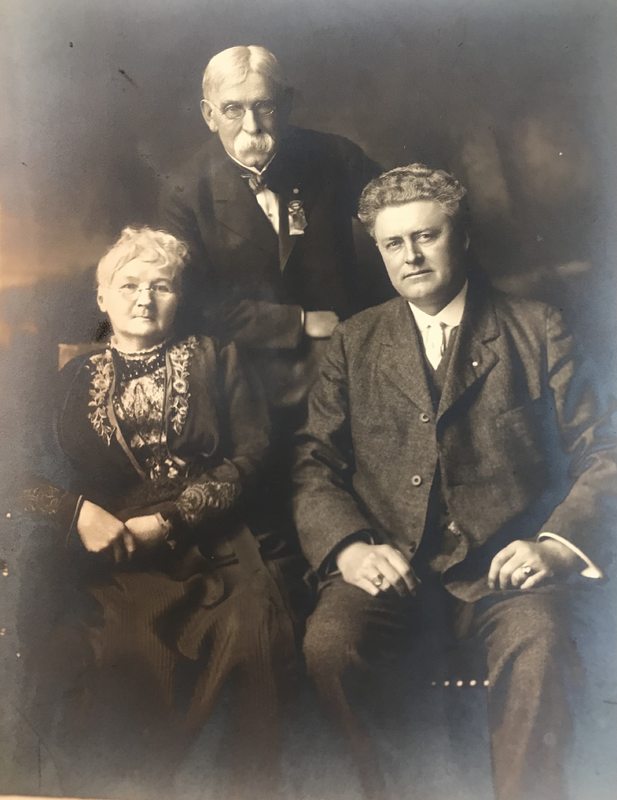 Powderly (Center) and two enduring friends from the labor movement:  “Mother” Mary Harris Jones on the left, and John B. White, right.

Powderly continued his work as a machinist as he approached his twentieth year. Striking miners in the region were not held in high regard: “I heard frequent comments on and criticisms of [strikes] among workmen not engaged in the mining business.” There were no unions among machinists or coal miners in Carbondale or Scranton. He noted that “it impressed me that there was something wrong in the labor world when so little sympathy was expressed by workingmen generally for striking miners.” (The Path I Trod, 23).

In 1869, the Avondale coal mine disaster near Plymouth, Pennsylvania killed 110 workers. Triggered by unsafe working conditions, a fire along a wooden mine shaft ignited a coal breaker above it, causing the suffocation of 108 miners and the death of two rescuers. The disaster caused a wave of labor unrest and organization in the state. That same year, the Noble Order of the Knights of Labor was founded by Uriah Stephens and a group of tailors about 100 miles south of Plymouth, in Philadelphia.

Terrible working conditions in the age of burgeoning industry caused many workers to join labor unions, and Powderly was one of them—he joined the local Scranton unit of the Machinists and Blacksmiths International Union in 1871, soon becoming secretary, then president of the union. Shortly after marrying Hannah Dever in 1872, he was fired from his job as a mechanic for serving as president of the union and “walked the [railroad] ties” into upstate New York and Canada looking for work. (26)

Rather than back away from his labor activism, however, Powderly leaned into it further. He gave speeches on the importance of unionization. He wrote articles for trade journals and newspapers. He also studied law, which certainly strengthened his mediation skills (and helped pay the bills). In 1874 he was elected a union delegate for several districts in Pennsylvania. “While the Knights of Labor were secretly working their way to light and a world’s recognition,” he notes, “I had never heard of that order.” (42) The Order maintained secrecy to protect its members from employer retaliation, a matter that would later become a sticking point with the Catholic Church.

Later that year, however, Powderly attended an anti-monopoly convention in Philadelphia and was invited to join “The Noble and Holy Order of the Knights of Labor,” though he wasn’t initiated until September 1876. After that, “I knew no waking hour that I did not devote, in whole or part, to the upbuilding of the Order.”(45) He found that the Order’s secrecy and lack of organization had led to “a babel of opinion being erected on a base of misunderstanding.”(48) When the local and general assemblies of members agreed to pool their issues in a General Assembly at Reading, Pennsylvania in 1878, greater consolidation and more efficient communication followed.

Powderly’s work resulted in his being elevated to the organization's General Master Workman (the Order’s highest office) in 1879. He was an extremely popular leader. People wrote celebratory songs and poems about him and hung his portrait in their homes. He was often greeted with cheers and celebration when he traveled to promote the Knights. William Mullen, a Knights leader and organizer in Richmond, Virginia, named his son Terence Powderly Mullen when the boy was born in 1885. A committed leader who cared about individuals ruthlessly exploited by corporate power, Powderly can be understood as a representative of the collective will of late-nineteenth century labor.

The Knights' approach to generating change was both local and national. Between 1869 and 1896 the order found its way into every state, comprising 15,000 Local Assemblies with over 700,000 members by 1886. The Knights found community, solace, and valuable information in their local meetings throughout the country. Local Knights organized and sponsored lectures and study clubs that were aimed at educating workers in economic principles. Knights' members were shoemakers, glass blowers, food processors, garment workers, and especially coal miners. Often, a local group was comprised of a single type of worker, say glass blowers; by the mid 1880s, however, "mixed" locals, those composed of members of different types of workers became more popular. New York, Chicago, Baltimore, Pittsburgh, and Boston all saw the rise of hundreds of locals. Women and Black Americans also had their own units, though the Order specifically discriminated against Chinese labor.

During these years Powderly made long-lasting friendships with important labor leaders who made real differences in the nature of work in the United States. As pictured above, he was especially close to Mary 'Mother' Harris Jones (ca. 1836-1930), the Irish-born rabble rouser and 'Miner's Angel' who was an active participant in the front lines of the American labor movement for nearly sixty years. Another labor colleague of Powderly's was John B. White (1870-1934), an Illinois-born coal miner and progressive president of the UMWA from 1911 to 1917.

← The Coal Breaker of the Family
Next Page:

The Catholic Church and the Knights of Labor →