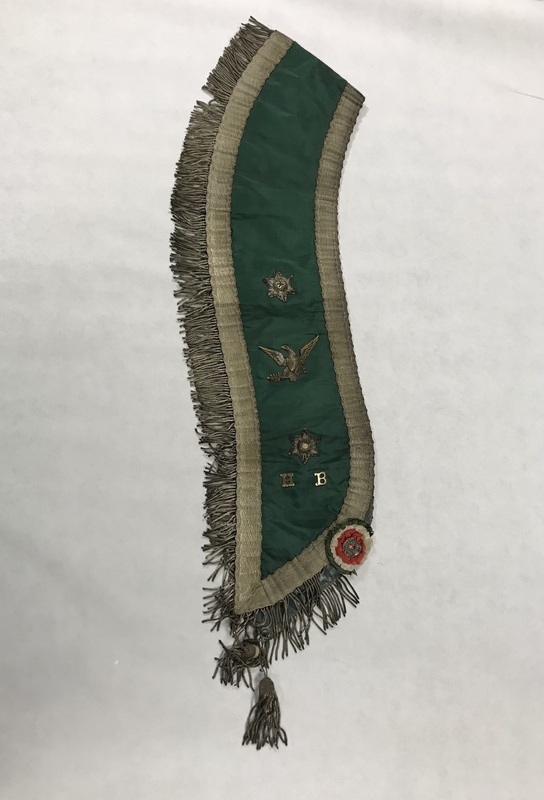 An avid supporter of Irish independence from British rule, Powderly spoke and organized on behalf of the cause. The collection contains several objects related to his membership in Irish organizations, including his Clan na Gael sash, pictured above.

Powderly was a strong supporter of Irish nationalism, participating in several efforts to promote the independence of Ireland from British rule. His sympathy was stirred at a meeting of Irish he happened upon in Carbondale one night in 1866. “The tale of Ireland’s wrongs was told in song and story that night, and I, becoming enthused, left the meeting, hurried home…took five dollars’ worth of five, ten, and twenty-twenty-five cent bills… and got back to the meeting before it adjourned.”(The Path I Trod, 176) Donating all of his saved funds to the cause that night, Powderly became a committed supporter of independent Ireland from eighteen years old through his adulthood.

His involvement spanned several organizations, including the Clan na Gael, a secret Irish-American society founded in the late-nineteenth century to support the Irish Republican Brotherhood’s efforts to establish an Ireland independent of British rule. The Clan na Gael managed the U.S. efforts to educate Americans on the Irish political situation, and fundraising efforts on behalf of the Irish revolutionaries. Powderly befriended several leading Irish nationalists, such as Michael Davitt and Charles Stewart Parnell, hosting the latter to a packed audience in a Scranton fundraising event. Though Powderly remained a strong supporter of Irish independence throughout his life, his duties as head of the Knights of Labor increased rapidly after 1883 and he was unable to devote as much time to the cause.

← The Catholic Church and the Knights of Labor
Next Page: