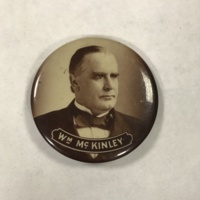 From the Terence Powderly Papers, a campaign button for William McKinley, ca. 1896. Powderly held great admiration for William McKinley, who represented impoverished coal miners without fee as a U.S. Congressman in Ohio in 1881. Powderly campaigned for McKinley when he successfully ran for president in 1896, and was appointed Commissioner General of Immigration in 1897 upon applying for the position, just after McKinley took office. 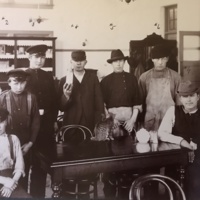 Photograph of immigrants employed in the kitchen at Ellis Island, December, 1901 from the Powderly Papers.

Terence Powderly was elected Mayor of Scranton, Pennsylvania on the Greenback-Labor Party ticket for three two-year terms from 1878-1884. That he was still under 30 years old when first elected is a testament to his political skill. Though known primarily a labor leader, politics came with the territory, especially in the politically and economically tumultuous years of the second industrial revolution. After he left his leadership position with the Knights of Labor in 1893, he became more involved in local, and eventually, national politics. He first met William McKinley in 1881 during a coal miners’ dispute in Ohio. McKinley, a lawyer, took up the case for miners accused of unlawful assembly without payment, as the miners couldn’t pay for counsel. This earned McKinley Powderly’s lasting admiration, and the two became good friends. McKinley was a Congressman from Ohio at the time, but would serve as U.S. President from 1897 until his assassination in 1901. To Powderly, McKinley was “a man who had a heart that felt for others’ woes; he was unpretentious, unassuming, and kind.” (The Path I Trod, 296) The Powderly papers contain numerous tokens of Powderly’s support and affection for McKinley. For his part, the former U.S. President appointed Powderly Commissioner General of Immigration in 1897.

Ellis Island was the main port of entry during Powderly’s term as Commissioner. Arriving at the immigration station, however, he saw “that all was not well… ill treatment of arriving aliens, impositions practiced on steamship companies, and discourtesy to those who called their meet their friends on landing were frequent.” (299) Powderly created a commission to investigate conditions at Ellis Island that resulted in charges of corruption and nearly a dozen firings. Powderly himself lost his position when McKinley was assassinated in 1901, though he was appointed by President Theodore Roosevelt Special Immigration Inspector in 1906. This position entailed travel to Great Britain, Germany, the Netherlands, Belgium, France, Italy, and Austria-Hungary to study the causes of immigration. Powderly next served, 1907-1921, as Chief of the Immigration bureau's Division of Information.

← Fighting for Ireland
Next Page:

Postscript: The Labor Hall of Fame →