Early Library Days at The Catholic University of America

After the founding of The Catholic University of America in 1889, the library quickly developed through the generous donations of books and entire collections from university faculty, including Dr. Thomas Bouquillon, Dr. Edward Aloysius Pace, and Rt. Rev. Eugene Xavier Henri Hyvernat. This early library made its home in the basement of the chapel in Divinity Hall, or Caldwell Hall as it is better known today. However, the rapidly expanding library soon outgrew Caldwell and was transferred to the ground floor of McMahon Hall in 1908. At the time of the transfer, the library already contained 52,000 volumes. Not long after the move to McMahon, the library yet again exhausted the available space and the need for a designated library building became increasingly apparent. In 1921, the opportunity to build such a structure became a reality through the generous promise of $500,000 by the millionaire founder of the Colorado Milling and Elevator Company, John Kernan Mullen. This came not a moment too soon; by 1923 head librarian Joseph Schneider found it necessary to store excess books in the basement of the gym as he awaited the new library facility. 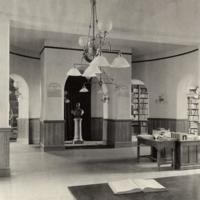 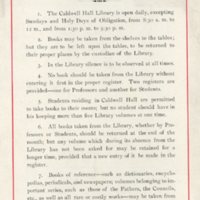 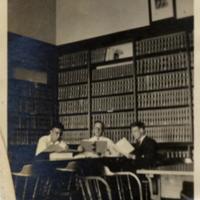 ← Construction of the John K. Mullen of Denver Memorial Library
Next Page:

Planning the John K. Mullen of Denver of Memorial Library →