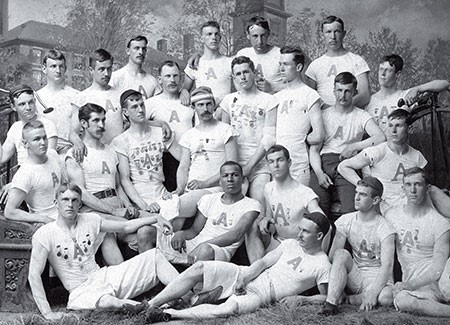 The year 1895 saw the inauguration of two new schools at the University to which lay students would be admitted, the School of Philosophy and the School of Social Sciences. Three African American male students from the District of Columbia were admitted to the new programs. One of these students, William Tecumseh Sherman Jackson, had earned his baccalaureate degree at Amherst College. He was the first student to be awarded the degree of Bachelor of Social Science on December 8, 1896. Along with his fellow students, Jackson is reported to have played football at the University's old athletic field. University historian Joseph Nuesse reports that alumni notes in a 1913 student publication claim that Jackson was “a star" player on the football team of 1895.

Jackson went on to teach at the M Street School in Washington, D.C., later renamed Paul Laurence Dunbar High School after the African American poet and playwright. Jackson taught mathematics and coached sports at the school for 38 years, also serving as principal there from 1906-1909.