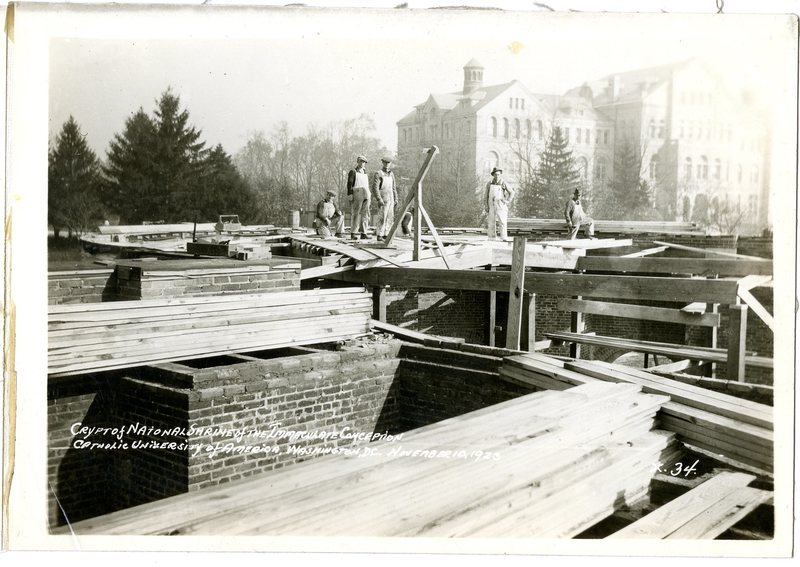 Unidentified laborers pause their work for a photograph on November 10, 1923. In the background sits McMahon Hall.

Group of unidentified laborers posing in front of the crypt level on September 12, 1923.

The cluttered construction site on September 12, 1923.

Construction on the crypt level did not actually begin until 1923, three years after the foundation stone was laid. The National Shrine of the Immaculate Conception Collection at The American Catholic History Research Center and University Archives contains a large number of photographs documenting the construction of the crypt level.

The first public Mass was held in the crypt church on Easter Sunday in 1924, despite the fact that it was still an active construction site. The first baccalaureate Mass was held on June 8, 1924—a tradition that continues to this day on the night before Commencement. Later that year, the Salve Regina Press reported: “In this crypt, incomplete though it is, already ordinations have been held and thousands of pilgrims have attended Mass, often said while the hammers of workmen punctuated the singing of the priest” (“Glories of the Crypt”).

Presciently, the closing paragraph of the same August 1, 1924 issue of the Salve Regina Press exactly predicts future delays: “When the National Shrine of the Immaculate Conception will be completed is as much a problem as the great cathedral-builders of the Middle Ages faced. Business depressions, wars—many things—may intervene.”

After the crypt level was completed in 1931, the project lay dormant for a variety of reasons. Shahan had resigned as University Rector in 1928 but continued to oversee the Shrine project until his death in 1932 (at which time he became the first and only person to be buried in the Shrine). For years he and his secretary, the Reverend Bernard A. McKenna, had been the “two master minds” of the Shrine project, but shortly after Shahan’s death, McKenna—considered the Shrine’s first director—returned to his pastoral work in Philadelphia. The loss of leadership was compounded by the onset of the Great Depression and the United States’ entry into WWII.