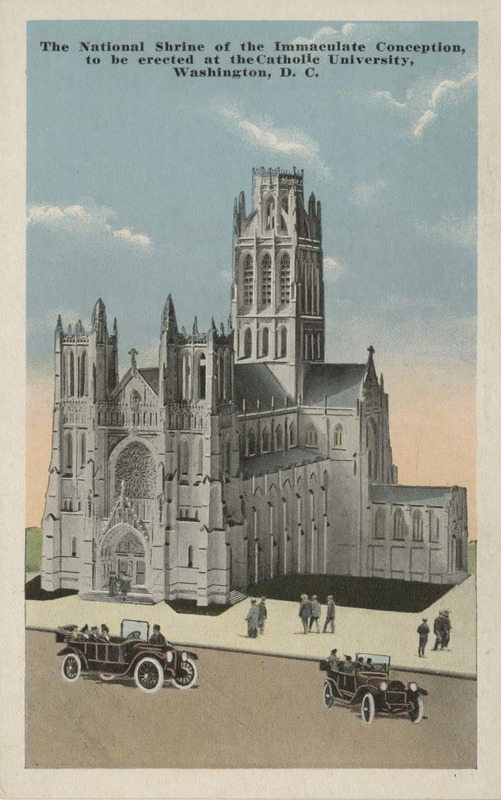 The earliest architectural plans for the Shrine, ca. 1915–1918, were Gothic in style. The decision to abandon this aesthetic alienated the Shrine’s first laywomen supporters. 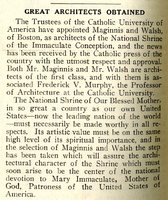 This is the small article from the June 1919 issue of Salve Regina that broke the disappointing news to Hoffman and other members of the NOCW who had envisioned—and worked very hard to realize—the Gothic design put forth by Hoffman's son, the architect F. Burrall Hoffman. 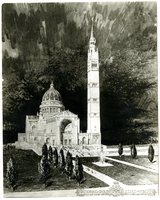 Early drawing by the chosen architects, Maginnis and Walsh. Notice that the bell tower is on the right hand side of the Shrine, as you face it; today, it is on the left.

Apart from the Pope’s contribution, early fundraising efforts were dominated by Catholic laywomen—the so-called “Marys of America.” One of the most influential of these was Lucy Shattuck Hoffman, who in addition to founding the National Organization of Catholic Women (NOCW) also happened to be the mother of an established architect. In 1915, her son submitted the “plaster model of Gothic design” pictured in the early promotional materials.

As such, Hoffman apparently took it for granted that her son would get the commission. But in 1918, the University’s Board of Trustees decided to abandon the Gothic in favor of a Romanesque design. For whatever reason, the devoted members of the NOCW were not made privy to the Trustees’ decision and were left instead to read about it in the pages of Salve Regina, the fundraising periodical they helped distribute (Tweed 33). Hoffman felt betrayed. The members of the NOCW’s New York chapter resigned in solidarity, and just like that, one of the first national organizations of Catholic women “abruptly disbanded” (Tweed 34).

Hoffman and other women who had belonged to the NOCW were conspicuously absent from the crowd at the foundation stone laying ceremony on September 23, 1920.

In the absence of any traditional American ecclesiastical style, the architectural firm Maginnis and Walsh felt that “the U.S. cultural condition allowed—even demanded—freedom to experiment” (Tweed 25). Hence the “Byzantine beach ball” we know today (Tweed 5). Some have suggested that Shahan and the architects, not wanting to seem like copycats, rejected a Gothic design because the National Cathedral, already underway in the District of Columbia, was Gothic. Others have suggested that they sought an alternative design because Gothic structures took too long to build—an ironic objection, considering the Shrine was only completed “according to its original architectural and iconographic plans” upon the dedication of the Trinity Dome mosaic in 2017: four score and seventeen years after the foundation stone was laid in 1920 (“Dedication of the Trinity Dome”).