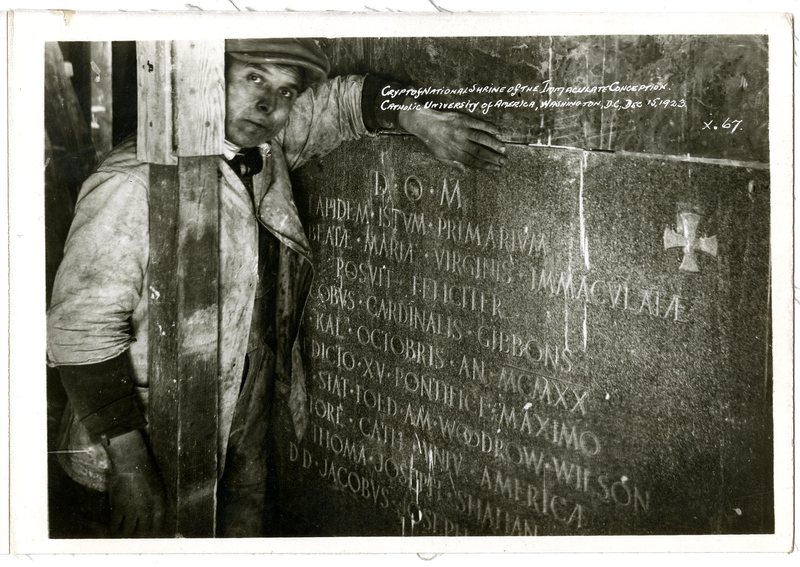 Unidentified laborer poses with the foundation stone on December 15, 1923, during the construction of the crypt church.

I also say to you that you are Peter, and upon this rock I will build My church; and the gates of Hades will not overpower it.
– Matthew 16:18 (New American Standard Bible)

Upon This Granite Block

The title of this exhibit alludes to the famous Bible verse in which Jesus proclaims, “upon this rock I will build My church.” Of course Jesus was speaking figuratively; it has been widely noted that the name Peter means “rock.” But just over one hundred years ago, The Catholic University of America set about building its own church on a literal rock—in this case, a massive block of polished black granite weighing four tons.

The foundation stone for the National Shrine of the Immaculate Conception was laid on September 23, 1920. But, like Rome, the Shrine wasn’t built in a day. In commemoration of the recent centennial, this exhibit delves into the early history of the Shrine—from its inception up until the intermission in its construction beginning in 1931.

All of the items in this exhibit were gathered from collections deposited in The American Catholic History Research Center and University Archives. The majority of items belong to the The National Shrine of the Immaculate Conception Collection, but others belong to the Thomas J. Shahan papers and The Catholic University of America Photograph Collection.