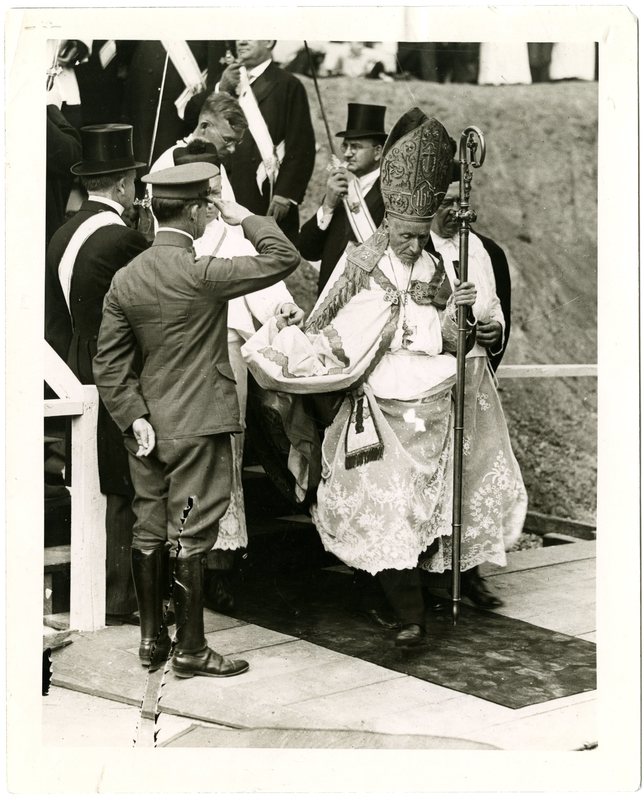 Cardinal James Gibbons, Archbishop of Baltimore, presided over the ceremonies. 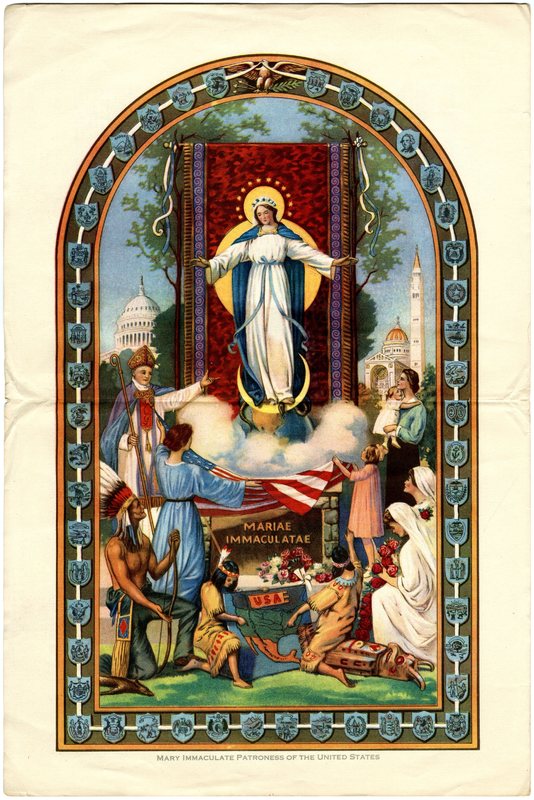 The center spread of the program from the foundation stone laying ceremony on September 23, 1920. Heavy on American imagery, the image includes  indigenous Americans, parallels the dome of the future Shrine with the dome of the Capitol building, and features a border of state seals.

Cardinal James Gibbons, Archbishop of Baltimore, presided over the laying of the foundation stone—as he had on numerous other occasions at the University (including the inaugural event on May 24, 1888, when the cornerstone of Caldwell Hall was laid). The next day, The Washington Post described the ceremony as “one of the most notable religious events ever witnessed in the National Capital,” and reported that “10,000 persons thronged the university campus to view the spectacle.”

Interestingly, the foundation stone was laid “only thirty-six days after women won the right to vote,” but the climate at the ceremony was not celebratory (Tweed 17). In his sermon that afternoon, the bishop of Duluth accused women of “seeking a freedom that is excessive” (“Vast Shrine Is Begun”). His apparent lack of support for women seems incongruous given that the Shrine was not only marketed explicitly to “America’s Marys,” but was also in large part the product of women’s fundraising efforts.

As you can clearly see in the center spread of the program from the foundation stone-laying ceremony, contemporaries were conscious of the ways the proposed Shrine would echo existing landmarks in the District of Columbia—most notably the dome of the Capitol Building and the obelisk of the Washington Monument. Writing in the July 1922 issue of The Architectural Record, at a time of fierce anti-Catholic prejudice in America, Sylvester Baxter hurries to explain that, “The shrine is by no means to be considered as intended to rival the Capitol; architecturally it complements it, rather; its grandly proportioned mass will be as manifestly ecclesiastical in motive as that of the Capitol is secular.” Similarly, the 1920 program describes the height of the “noble Campanile or bell tower” as “second only to the Washington Monument.”