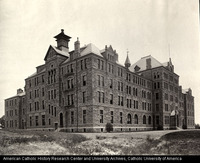 The first building to be erected as part of the CUA campus was Caldwell Hall.

On May 24, 1888 the cornerstone was laid for this building, which was known as called Divinity Hall at the time.  A range of prominent figures were present, including President Grover Cleveland, Cardinal James Gibbons of Baltimore, who would be heavily involved in University affairs, and University benefactor, Mary Gwendolyn Caldwell, who would eventually be recognized for her donation with a golden medal by Pope Leo XIII.

It was then that Bishop John Lancaster Spalding gave a speech that approached an idea of what he wanted the school to be.  Here he expressed hope that the school would be the home of ancient wisdom and new learning and would encourage research, stimulate thought, refine taste, and strive for excellence. Spalding also expressed a desire for the University to be a scientific institute as well as a school for culture and training for life. The university, Spalding hoped, would educate minds that gave direction to the age and be a nursery of ideas and be a center of influence.

By late 1889, Caldwell Hall was completed. The University opened its doors in November of that year, where the President of the United States Benjamin Harrison was present. The Romanesque architecture stood as one of the only examples of its kind in the DC at the time. A neoclassical revival was about to take off downtown on the National Mall, so this type of architecture would be unique in the city. Caldwell Hall also has a chapel that was financed through a donation from Mary Caldwell’s younger sister, Lina, at $50,000.  Mass was celebrated there on opening day in 1889, and a year later, Lina Caldwell was married there

Caldwell Hall, being the campus’s main building, housed University scholars who had a national reputation.  Two notable residents were Father John A. Ryan and Monsignor George G. Higgins. Find out more about Ryan or Higgins, click the respective links. 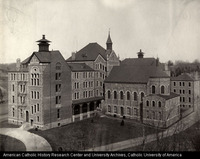 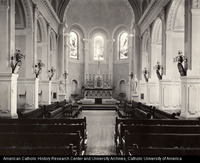