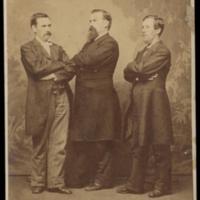 In the Fenian Brotherhood Records and O’Donovan Rossa Personal Papers, we see the formation of an Irish American organization with the avowed purpose of overthrowing British rule in Ireland and establishing an Irish Republic. As the American arm of the Irish Republican Brotherhood, the Fenians mounted two brief invasions of Canada in 1866 and 1870, while their Irish brothers launched a small rebellion in Ireland in 1867. Lack of success in these efforts contributed to the decline of the Fenians; they completely dissolved by 1886.

However, many of the leaders, including Jeremiah O’Donovan Rossa and Thomas Clarke Luby, continued the fight for Ireland’s independence as well as inspired future Irish and Irish American leaders. Most notably, after O’Donovan Rossa’s death and the return of his body to Ireland in 1915, Patrick Pearse spoke at O’Donovan Rossa’s graveside of the next generation of Irish Nationalists’ responsibility to carry on the Fenian agenda. Pearse would go on to be the principal leader of the Easter Rising of 1916, just one year later.

Fenian Brotherhood: Commitment to the Cause →