From the Weekly Freeman and United Ireland newspapers, these items from the Irish Home Rule Political Cartoons Collection of 1884 and 1885 illustrate the continued struggle for independence. Several of these cartoons address the issues relating to the Land War of the 1870s and 1880s, which was fought as evictions and bad harvests encouraged general upheaval in Ireland. Established in 1879, The Land League organized resistance to evictions and discouraged violence (though violence often resulted). In "The Law's Delay," Erin is seen appealing to judges and officials of the Land Court to "Wake up! Wake up! While you are sleeping my poor people are being evicted all over the country."

In one especially poignant image, "Within Measurable Distance" from The Weekly Freeman, Irish Americans and “Erin” are represented by two women standing on the rubble of Landlordism, Coercion, and Castle Officials among others. As they lean on each other, the Irish American points to “Legislative Independence” in the distance and encourages Erin to “keep moving dear sister, for though the road is very rough I guess you are very near what you want.” 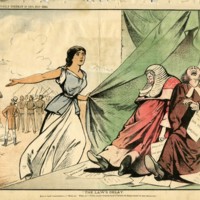 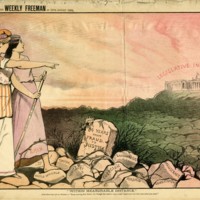 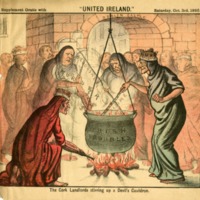 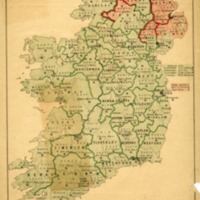 The United Ireland newspaper was founded to be the voice of the Irish Parliamentary Party by the famous Irish statesman, land reform advocate and leader of the party, Charles Stewart Parnell. Published from 1881 to 1896, it joined the Weekly Freeman in including large format chromolithograph cartoons featuring the Irish politics of the day. The map on this shelf depicts “The New Electoral Map of Ireland” following the general election of 1885, with the Nationalist areas in green and the Tory areas in red. The results of this election during the Home Rule Crisis revealed a newly effective Irish Parliamentary Party.