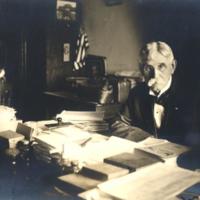 As a child of Irish immigrants in the United States, Terence Vincent Powderly (1849-1924) was a strong supporter of Irish nationalism. He served as a member of the Clan Na Gael, an American secret society committed to revolution in Ireland and Irish independence, and to the Irish Land League in America, an organization which supported the Land League in Ireland’s efforts to help Irish tenant farmers gain control over the lands they rented and to gain Home Rule for Ireland. He is also remembered as the Grand Master Workman of the Knights of Labor, mayor of Scranton, Pennsylvania, and as an official with the U.S. Bureau of Immigration and the U.S. Department of Labor in Washington, D.C.

This exhibit includes various ribbons belonging to Powderly, including two Ancient Order of Hibernians ribbons and one United Irish League of America Delegate ribbon for their 5th Biennial National Convention (1910). The United Irish League of America (UILA) supported the Irish Parliamentary Party’s peaceful effort to gain Home Rule. The large sash in the center was his Clan Na Gael sash and would have been worn over one shoulder and across the chest. 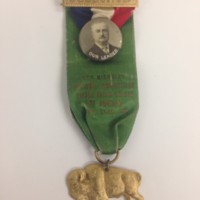 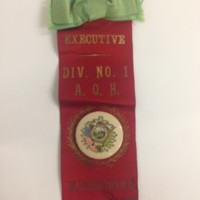 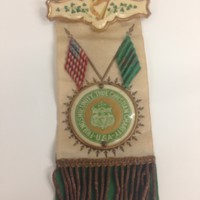 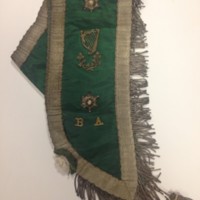