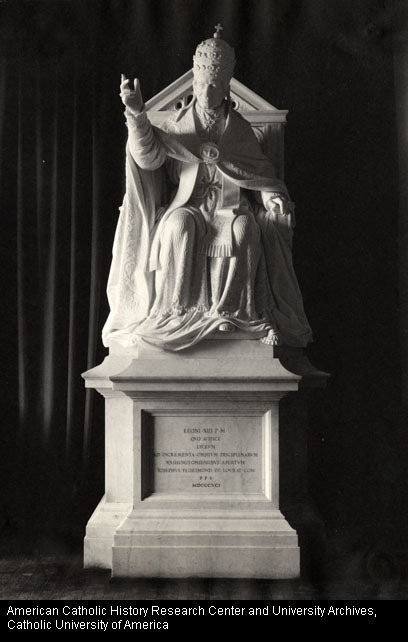 The decision to create a Catholic University was made at the meeting of the Third Plenary Council of the American bishops in December 1884. This decision was heavily influenced by a gift of $300,000 offered for the purpose of creating a national Catholic university by Mary Gwendoline (known as “Mamie”) Caldwell, who was a friend of Bishop John Lancaster Spalding.

The idea behind the school was that it would serve as an antidote to what was perceived at the time as the increasing secularization of the nation’s schools.  Many thought that a new university would reinvigorate dedication to Catholic doctrines and produce graduates who would serve as examples of virtue in an increasingly individualistic society. It was the bishops who had to authorize the creation of a school with such ambitions, as it was only they who could grant academic titles backed up by training in church-related matters.

Additionally, and fortuitously for the US Catholic bishops in favor of creating a national Catholic university, the Pope at this time, Pope Leo XIII, who served from 1878 to 1903, was very interested in higher education.  Leo was therefore very receptive to a proposal submitted to him by the American bishops in 1884 that a Catholic university be founded in the U.S.  So, we can say that the Pope is the official founder of CUA!

From the start this new university would be seen as a national institution, since no single diocese would be able to create this institution as it had been envisioned.  While the notion of a Catholic university was not altogether new (Georgetown had already been chartered as a University by this time), the mission of CUA was to teach Catholicism and the intellectual disciplines together solely at the graduate level. After Johns Hopkins University, in nearby Baltimore, CUA was only second university in America dedicated to graduate education and the production of new research.

In 1885 it was decided that Washington, DC would be the location of this new university because the bishops saw it as a common ground – neither north nor south nor west – but as co-founder John Lancaster Spalding put it, “common ground upon which we can all meet to establish a national institution.”

The bishops of the United States who in the 1880s saw a Catholic university as being:

* An educational setting where Catholic teaching and scientific teaching could be reconciled.

* A higher educational institution (there were many Catholic elementary schools and high schools already, this was to be a graduate institution) that maintained a Catholic identity in a secular and sometimes anti-Catholic society.

* A way to keep Catholics seeking a university level education within the faith.

* An institution for the improvement of the education of priests and members of religious orders.

← The University's Founding and Early Years
Next Page: