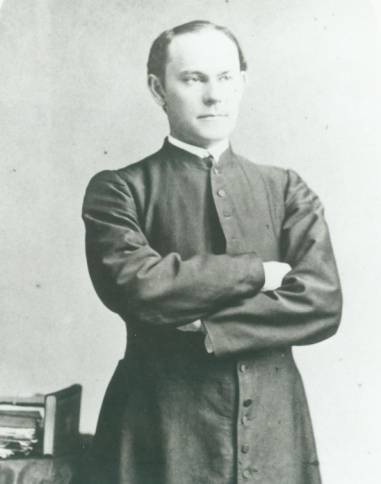 Bishop John Lancaster Spalding was a crucial advocate for the establishing of The Catholic University of Amercia. The books in this portrait, taken around 1880, suggest both his faith and and his dedication to intellectual excellence. Courtest of the American Catholic History Research Center and University Archives, CUA, General Photograph Collection.

The proposal to create a national Catholic university in America reflected the rising size and influence of nation’s Catholic population and also an ambitious vision of the Church’s role in American life.  Until the 1830s, Catholics were a relatively small minority in a predominantly Protestant nation.  Throughout the nineteenth century, Rome considered the United States a “missionary” territory—a region where the Church was not fully established and dependent upon foreign clergymen.  But the immigration of millions of Catholics from Ireland, beginning in the 1830s, and from other parts of Europe later in the century, dramatically increased their numbers.  By 1860, there were over 3 million Catholics, making them America’s largest Christian denomination.  After the Civil War, American Catholics continued to increase in numbers, prosperity, and influence.

The leading proponent of a national Catholic university was the Rev. John Lancaster Spalding who in 1877 was appointed Bishop of Peoria, Ohio.  Spalding envisioned a university that would train American–born clergymen and combat prejudice against Catholics by creating a truly excellent national intellectual center.  In 1882 Bishop Spalding went to Rome to obtain the support of Pope Leo XIII.  Spalding also persuaded family friend Mary Gwendoline Caldwell to pledge $300,000 to establish the University.  In 1884 the Third Plenary Council of Biships, meeting in Baltimore, resolved to accept the gift and move forward with establishing the institution.  The mission of the university was to teach Catholicism and human nature together at the graduate level.  After Johns Hopkins University, CUA was the second university in America dedicated to graduate education and the production of new research.  By developing new leaders and new knowledge, the university would strengthen and enrich Catholicism in the United States.  In 1885, a committee was appointed to develop and establish the university, the main leaders being Spalding, Bishop John Ireland of St. Paul, and Cardinal James Gibbons of Baltimore.

Many of the founders of the CUA, including Ireland and Gibbons, advocated an “Americanist” vision of Catholicism—a vision that included both a sense of the Church’s special role in United States and also a conviction that scientific and humanistic research, informed by the Faith, would only strengthen the Church.  In the later nineteenth century, the church-state relationship in America was quite different from the one in Europe.  In most of Europe, Catholicism enjoyed the position of a state-established church.  Gibbons, Ireland, and others argued that the Church should respect the unique character of American constitutional law and customs.  At the same time they sought to develop the kinds of institutions—like a national university—that, through private funding, would promote the Faith in a context of religious freedom, spiritual pluralism, and intellectual rigor.