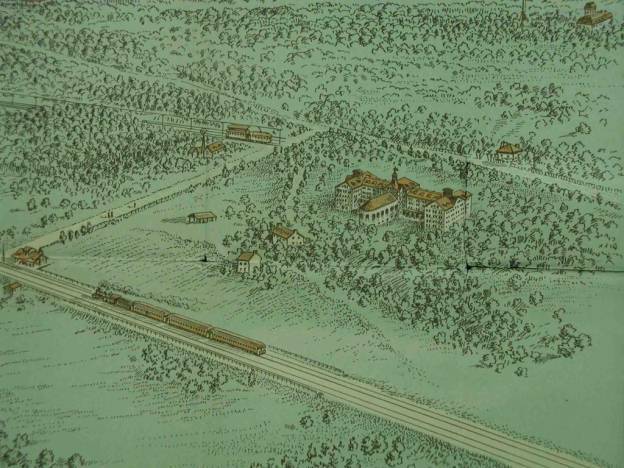 This image of the CUA campus in 1890 shows a largely undeveloped area of wooded land and pastures. Newly erected Caldwell Hall stands in the center of the image; St. Thomas Hall to the left. In the upper right is the Soldiers' Home. Connecting the university to the city center were the railroad, running across the bottom of the image, and the newly-contrusted electric streetcar that ran up 4th Street to the southern edge of campus. Detail from the map "University Heights," c. 1890. Courtesy of the American Catholic Research Center and University Archives, CUA.

The question of where to locate the campus was one of the many challenges faced by the committee appointed by the Bishops to establish the new Catholic University.  While New York and Philadelphia were considered, the nation’s capital had the most advantages.  In addition to its national symbolism and importance as a political center, the capital was growing rapidy and economically vibrant.  Washington had great general library, The Library of Congress, a superb law library, scientific laboratories, the Smithsonian Institution with all of its museums, and also the National Observatory, and other unparalleled research facilities.

After deciding on the District of Columbia, the committee purchased a tract of land outside the developed city center—land adjoining the grounds of the Soldier’s Home, which had been built for Civil War veterans.   The decision to purchase land outside of the city was made in part because the area’s elevation (several hundred feet above the Potomac) made the air both cooler and healthier than downtown.   Mary Todd Lincoln praised these features of the area, which she enjoyed visiting, in letters written during the War.  Much of downtown Washington was still swampy and plagued by diseases borne by mosquitoes and contaminated water.  The Baltimore and Ohio railroad provided access to the city.  The land purchased for the university’s plot was an estate then owned by the Middletown family, which consisted of sixty-five acres and cost  $27,000. 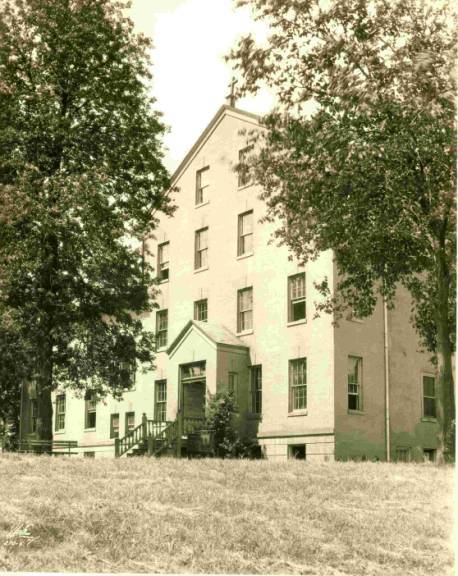 The main house on the Middletown estate had been built about 1803 by a prominent and well-connected newspaperman, Samuel Harrison Smith.  The visits of such leader political figures as Thomas Jefferson and James Madison were described in the letters of family members. After it was acquired by the University, themain house was renamed St. Thomas Hall; it severed various as the home of the Paulist Fathers and as a University building until it was demolished in 1978.  The first building constructed for the University was Divinity Hall, a large stone building to house classrooms, offices, and a chapel.  The cornerstone of this building, renamed in honor of Mary Gwendoline Caldwell, was laid on 24 May 1888.

When the University first opened for classes in the fall of 1888, the curriculum consisted of lectures in mental and moral philosophy, English literature, the sacred scriptures, and the various branches of theology.  At the end of the second term, lectures on canon law were added.  Each university professor was hired because of his reputation in his own branch of study.  All were recruited from other institutuions, experienced teachers, and well known for their original research.  The first students graduated in 1889.

← A Catholic University
Next Page: