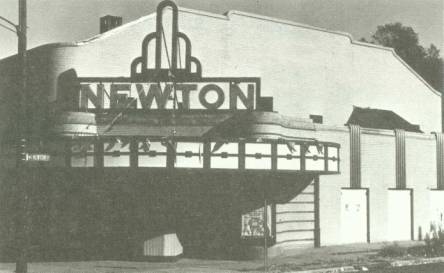 The Newton Theater provided a place for Hollywood entertainment in the 40's and 50's, building up the commercial area of 12th Street. Courtesy of the American Catholic History Research Center and University Archives, CUA.

What began as an isolated village became a vibrant neighborhood closely linked to downtown Washington in the early decades of the twentieth century. Brookland boomed with developmental activity that helped establish it as a unique Washington neighborhood.

Improved transportation helped make Brookland an attractive place to live for workers. In additoin to the railroad, by 1912 a second streetcar line was built along 12th Street, serving the growing residential community. The streetcar helped establish 12th Street as the neighborhood's commerical and civic center. In 1927 Brookland celebrated the paving of its "Main Street," an improvement that reflected the increasing availability of automobiles. The vitality of the Brookland village was made obvious by the construction of two movie theaters, the Jessie and Newton Theaters on 12th Street.  The growth of the Catholic University and other Catholic institutions in the area attracted many Catholics to the Brookland neighborhood.  St. Anthony’s Catholic Church was built on 12th Street in the 1920s to serve the local Catholics; St. Anthony’s Catholic high school was founded by the Benedictine Sisters in 1928. 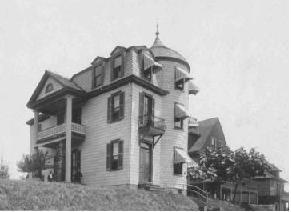 The towering Victorian house and its neighbors represents the early development of Brookland - a time when a number of lots had not yet been built upon. By 1920, there were houses on almost all lots in the area. Courtesy of the American Catholic History Research Center and University Archives, CUA.

The Brookland neighborhood quickly emerged as community that included people of varied economic statuses.  Near the larger homes of the more prosperous residents stood the more modest homes of middle- and working-class families.  The styles of homes also varied: alongside elaborate Victorian houses were more simple Colonial and Craftsman structures.  Unusual examples include John Louthan’s Round House (1901) and Carrie Harrison’s “Spanish Villa” (1909).  Several houses in the 1920s were ordered from the Sears and Roebuck mail-order catalogue: the “Rodessa” model at 1518 Hamlin Street is similar to many modest bungalow style houses built in the neighborhood.

Pearce, John N.  “Brookland:  Something in the Air.”  Washington at Home: an Illustrated History of Neighborhoods in the Nation’s Capital.  Edited by Kathryn Schneider Smith.  Northridge, CA: Windsor Publications, 1988.

← The University Expands
Next Page: