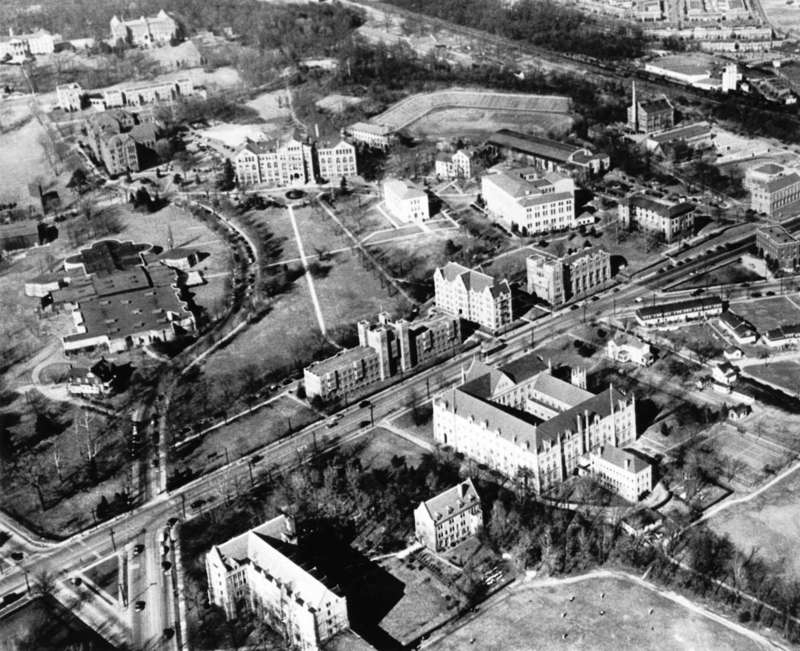 An aerial photograph of the CUA campus and neighboring institutions around 1930. For a copy of the image with buildings labeled, click here. Copyright, Basilica of the National Shrine of the Immaculate Conception. Used with permission. All rights reserved.

The presence of CUA attracted other Catholic institutions to the area including colleges, religious orders, and national service organizations. Between 1900 and 1940 more than 50 international Catholic institutions rented or owned property in Brookland. As clerics and religious men and women of different orders walked around in their religious robes, Brookland began to be called â€œLittle Rome.

The Franciscans were one of the first orders to establish a presence near the University and by 1890 they purchased a large tract of land to the east of campus. Their large, well-appointed monastery was completed in 1905, and is well known for its beautiful gardens and reconstructions of sites sacred to Roman Catholics. Other Catholic orders also established themselves amongst the Brookland community by operating schools and houses of study. The Marist Brothers bought the former Brooks mansion in 1901 and established a school there in 1905. After building a new location for themselves on Harewood Rood north of the CUA campus, they sold the Brooks mansion to the Benedictine Sisters, who used the Mansion for St. Benedict's Academy, beginning in 1906, and St. Anthony's High School beginning in 1928. Other Catholic institutions in the area include the Paulists, and the Dominican House of Studies (1901) and the United States Conference of Catholic Bishops. 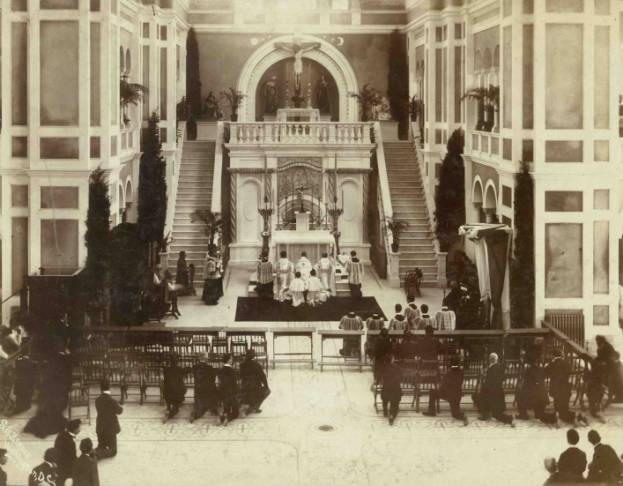 The Basilica of the National Shrine of the Immaculate Conception, built between 1920 and 1959, produced another place of pilgrimage for Roman Catholics, helping to reinforce the presence of the Church in the nation's capital. With the growth of Trinity College founded in 1897 by the Sisters of Notre Dame de Namur and the establishment of Theological College in 1917 by the Society of St. Suplice, Brookland became a center for Catholic education. The bells of the Monastery, the Basilica, and other Catholic and Protestant houses of worship could be heard throughout the neighborhood, calling students and clergy to prayer. In 1921, Trinity College student Anna M. Du Brul described the sound in her poem: The Bells of Brookland. And then again at high noon hour / They bid us stop to pray,/ To thank God has His blessings shower / Upon us through we stay.

Pearce, John N. Brookland: Something in the Air. Washington at Home: An Illustrated History of Neighborhoods in the Nation's Capital. Edited by Kathryn Schneider Smith. Northridge, Ca.: Windsor Publications, 1988.