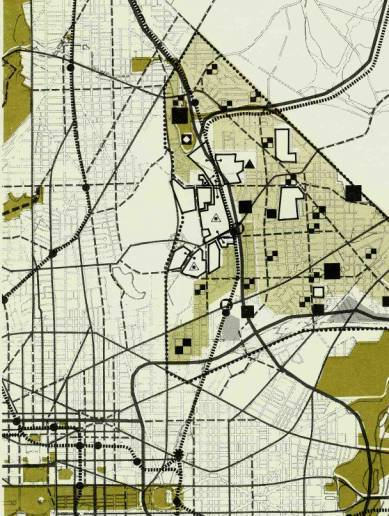 After the freeway proposal was defeated, the Metro was constructed along the old Boston and Ohio Railroad right-of-way. Government Printing Office Map.

Throughout the Great Depression, Brookland’s business district sustained its commercial stability.  Consistent business from Catholic University helped protect the shops from financial trauma.  Brookland’s small town atmosphere attracted Catholic University students and residents, who called it “the village.”  Despite Church teachings against racism, which led to the integration of CUA in the late 1930’s, most residential neighborhoods in Washington, including Brookland, remained predominantly white.

Brookland began to became more integrated in the 1930s.  By that time, urban development had surrounded the previously isolated Brookland area, and the proliferation of automobiles encouraged some families to move to more remote suburbs across the Maryland border.  Moving into the neighborhood were middle-class black families.  Particularly after WWII, Brookland became an attractive site for members of Washington’s growing black middle and upper classes, who were reaping the benefits of increased educational opportunities and secure government jobs.  One sign of this trend was the construction of houses designed by the city’s leading black architects.  Some white residents opposed to racial integration and resisted it by signing covenants to prevent the sale of real estate to blacks.  However, local activists were beginning to organize in this period to overturn such discriminatory practices.  Following the Pope’s condemnation of racism in 1936, CUA became one of the first institutions of higher education in the South to become racially integrated.  And in Brookland, black families continued to purchase homes.

By the 1950’s, Brookland was a stable middle-class community with both black and white residents.  When a new threat to the area emerged, it both divided and united the neighborhood and the University in new ways.  As part of a national freeway program, regional planners designed a freeway connecting the Maryland suburbs to downtown Washington—that would run right through Brookland.  Several paths were proposed, but they generally followed the route the old Baltimore and Ohio railroad.  This proposal outraged Brookland residents and the CUA community.  Members of both groups objected to the displacement of families by the proposed construction and to the even greater harm of having their community cut in two.  During several years of dispute, some prosperous black Brookland residents felt that the freeway project was inescapable.  Like their white predecessors, they moved to the suburbs in Maryland.  However, the combined efforts of neighbors and the University did defeat the freeway proposal.  Ultimately, the Red Line of the city’s Metro was built on mostly buried tracks along the proposed freeway route.  Brookland remains one of Washington’s few historically integrated neighborhoods.

Smith, Katherine Schneider, ed.  Washington at Home: An Illustrated History of Neighborhoods in the Nation’s Capital.