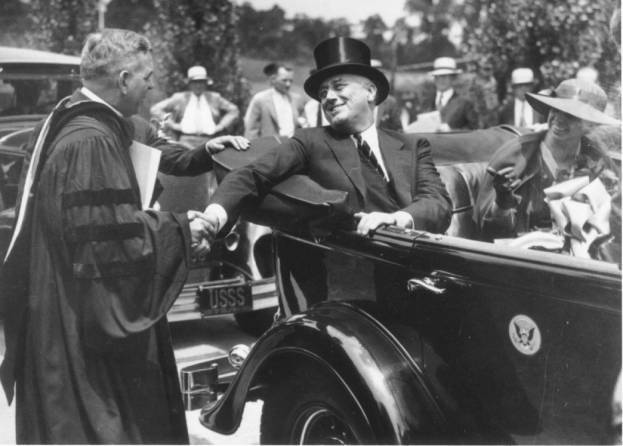 As the Great Depression set in after the stock market crash of 1929, CUA’s role expanded.  During these years the admission of women to the graduate school of Arts and Sciences expanded the student body, and a number of athletic teams—including boxing and football reached national prominence.  In addition, many looked to the university and associated organizations for guidance in organizing relief for those who needed it as the nation’s economic difficulties grew more severe.  The University’s School of Nursing, begun in 1935 under the leadership of Sister Mary Olivia Gowan, reflected the growing commitment of the University to social service.  Throughout the Depression the University community answered their faith’s call for charity, reached out to local communities, and provided moral leadership at the national level.

An important leader in the Catholic movement for social justice was Monsignor John A. Ryan, a Professor of Moral Theology at the University.  Ryan had written his doctoral thesis on the necessity of a minimum wage and continued throughout his career to advocate workers’ need for representation and labor unions.  In 1920, the National Catholic War Council organized a National School for Social Service headed by Agnes Regan.  The School of Social Service developed a campus on the northern portion of the CUA grounds and was incorporated into the university in 1964.  From 1920 to 1940, Ryan served as the head of the school’s department of social action.

Meanwhile, Ryan developed a national role as a spokesman for Catholic social justice theology.  During the dark years of the Great Depression, Ryan’s advocacy work included national broadcast radio addresses.  Many of the ideas he and other Catholic advocates of Social Justice promoted were instituted under President Franklin Delano Roosevelt in the 1930s.  As a consequence of his national leadership, Ryan was sometimes referred to as to as “The Right Reverend New Dealer.”

Mohler, Dorothy A.  “Agnes Regan as Organizer of the National Council of Catholic Women and the National Catholic School of Social Service.”  In Pioneering Women at The Catholic University of America.  Edited by E. Catherine Dunn and Dorothy A. Mohler.  Hyattsville, Md., 1990.