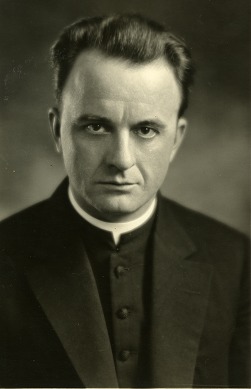 Possible first arranger of "My Little Girl" ("Oh, CUA, We're Rooting for You")/"CU Will Shine" and "Drink a Highball"

From Paul Scimonelli's Ph.D. dissertation, A History of the Benjamin T. Rome School of Music of The Catholic University of America, p.14: “With Fr. Gabert's return to France in 1924, Fr. William DesLongchamps became the Director of Ecclesiastical Music in 1925. He had studied at the Schola Cantorum in Rome and at the Abbey of Solesmes, France. He purported to hold a Doctoral degree. This was not altogether accurate... Fr. DesLongchamps would, however, be extremely important to the beginnings of instrumental music performance on campus. In the fall of 1925, he began a small but enthusiastic Orchestra comprised of University students, and used the brass section as the Pep Band for football and basketball games. This band made its debut at the CUA-Villa Nova football game on October 28, 1925.

In 1926, he organized the first University Schola Cantorum, which met at 7:30 P.M. on Tuesdays and Thursdays. It performed mostly Gregorian Chant and polyphony from the Middle Ages to the 16th century. Membership consisted of lay and religious from the Catholic University community, as well as singers from the city and non-University Glee Clubs. Fr. DesLongchamps became musically involved with Mrs. Justine Ward, who had developed a unique method of teaching Gregorian Chant to children (and after whom Ward Hall, the building that houses the Benjamin T. Rome School of Music, is named).

Fr. DesLongchamps and Mrs. Ward would become the central figures in an attempt to establish a school of Ecclesiastical Music in 1929. When Fr. DesLongchamps resigned in 1930, the band program lay dormant until 1932.