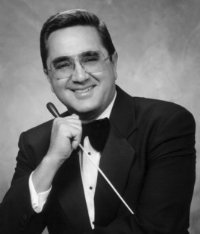 Arranger of the Brass Quintet version of "Guardian of Truth," based on the Reagan harmonization, 197?

Robert J. Garofalo is Emeritus Professor/Conductor of the Benjamin T. Rome School of Music of The Catholic University of America in Washington, D.C. Dr. Garofalo has conducted bands, orchestras, choruses, and operas for over 40 years. He can be heard and seen on over 15 audio and video recordings in a variety of musical venues. For example, from 1989 to 1992, he was music director of Eternal Winds of Washington, a versatile professional ensemble; and from 1978 to 1988 he was conductor of Heritage Americana, a recreated Civil War era brass band that performed on period instruments. Heritage Americana is featured at Ford’s Theater, Washington, DC, in the video series The History of Bands in America and heard on the sound track of Ken Burns’ TV documentary The Civil War.

Dr. Garofalo is author of 18 books, 50 articles, and 25 music publications which are highly regarded in the profession. His articles both scholarly and practical have appeared in national and international music journals and dictionaries. His most noteworthy book publications include Improving Intonation in Band and Orchestra Performance; Rehearsal Handbook for Band and Orchestra Students; Guides to Band Masterworks; A Pictorial History of Civil War Era Musical Instruments and Military Bands (with Mark Elrod); Guide to Score Study and Lead and Inspire: A Guide to Expressive Conducting (both coauthored with Frank Battisti), and the multi-volume Wind Band/Ensemble Anthology Series: Folk Songs & Dances in Wind Band Classics. Currently, Dr. Garofalo is President of Whirlwind Music Publications which he founded in 1998. He continues to be active as a guest conductor, clinician, lecturer, and adjudicator throughout the United States, Canada, and abroad.