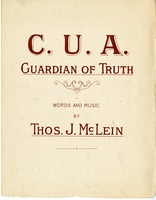 Cover of the Original Vocal Score

Note the misspelling of McLean's name

Though Thomas J. McLean's lyrics won second place in the 1920 Alma Mater Song Competition, it is his song, "Guardian of Truth," that Catholic University has used at official events into the twenty-first century. McLean was a student at the Sulpician Monastery when he wrote the music and lyrics. The University's Glee Club, founded in 1921 and directed by the German language professor Dr. Leo Behrendt, made the song popular as they performed it on campus, around town, on tours, and on the radio (both national and international). They found McLean's song to be more suitable for men's voices, and it just caught on. Click here to learn more.

Performed by the cast of "Songs of Old CUA" with the Flying Cardinals Dance Band (Kyle English, conductor) 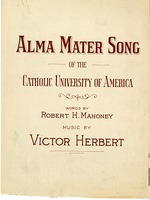 Cover of the Original Vocal Score

The famous and popular operetta composer Victor Herbert was asked by a committee of students (headed by John Joseph Relihan) if he would compose music for an alma mater song for The Catholic University of America. He agreed, noting that he was not Catholic but would be happy to donate a song anyway. The lyrics by CUA student Robert Mahoney (Class of 1920) were awarded first place by the panel of faculty judges. Herbert was sent the lyrics of both the first- and second-place winners (Mahoney and Thomas J. McLean) and concurred that Mahoney's lyrics were more suitable. Despite the first-place win and the fame of the composer, "Hail CUA!" did not catch on and has only rarely been heard on the CUA campus. Click here to learn more.

Not much is known about the reason this song was written. In the mid 1970's, professor and then wind ensemble director Dr. Robert Garofalo asked Reagan to arrange Guardian of Truth for winds. In a letter accompanying the score and parts, Reagan apologizes for what he considered to be flaws in his arrangement, blaming a lack of time which prevented him from doing the job to his full satisfaction. Included with the letter, without mention, was a copy of this song. It lacks words and most likely never had any.

In a recent interview, Dr. Garofalo suggested a possible reason for this work. In 1977, a decision was made that the orchestra was no longer to play at graduation, but rather the wind ensemble. There was no band arrangement of "Guardian of Truth," so Dr. Garofalo asked Reagan, his close friend and a composer, to arrange the piece for winds. Though Dr. Garofalo has professed admiration for the McLean composition, he suggests that they may have discussed the idea of providing a new alma mater song to replace the McLean composition.

This piece was unearthed just in time for the nursing school's 75th anniversary. It was composed by Behrendt, founder and conductor of the original Glee Club. Fitch (class of 1943), a nursing student, wrote the lyrics.

It is likely that this alma mater song was presented on this first concert in 1942, since The Tower lists the full programs for the spring and Christmas concerts of 1943 and this song is not listed in either. It is possible that it was performed as an encore and thus not listed or perhaps was written for graduation or another function. Fitch graduated in the spring of 1943.