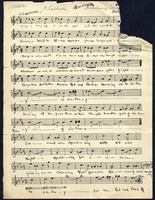 A March 11, 1931, Tower article announced: "Student Body Likes New Marching Song." It continues, "The new C. U. marching song, which was formally introduced to the university at the recent athletic carnival, created quite a favorable impression on those who were fortunate enough to hear it. The double quartet of the Glee Club gave a splendid rendition of the composition, singing with the spirit and vigor necessary to a correct interpretation of a march of its type. It is of interest to note that the composers took an active part in presenting the song to the public. Mr. Michael McDonald of Graduate Hall and Mr. Clement Ducy, sophomore, who collaborated in the writing of the composition, were heard in its presentation, Mr. McDonald at the piano and Mr. Ducy singing in the double quartet."

The work was wildly popular in its first few years. A Sept. 30, 1931, Tower article states: "The music is only known by a few (who are backing the new song to the limit), so it is The Tower's desire that all C. U. learn this song, a one hundred percent C. U. song, and suggests that the cheer leader conduct pep meetings for the purpose of making this song known and for the purpose of re-establishing enthusiasm for C. U. activities. McDonald and Ducy find this plan acceptable to them and have offered their services in their educating of C. U. men to the new C. U. song." The authors pushed the song throughout 1931, and the reports in The Tower indicate that it was popular. But a May 4, 1933, headline reads: "Rumors That Marching Song will Be Withheld Denied By Co-Author/Co-Author Of song Denies Knowledge Of Details/ADMITS C'PYRIGHT/Leman Endeavoring To Secure Song For band." The work was copyrighted on February 30, 1931. After this article, there is no mention of any such troubles. The same article states: "The melody has become a favorite of the student body and has been sung frequently at its football meetings and at games in the stadium. The prevalent rumors that it is no longer available to the students for use have disappointed the band, the members of which now cry for the adoption of some official football or marching song in its stead, if their old favorite can not be procured." In May of 1933, Fred Waring and his Pennsylvanians broadcast the march on the Old Gold hour over the Columbia Broadcasting System on a program of famous college songs. [Tower, 1933-05-04: "Ducy, C. U. Composer, Hears Number On Old Gold Radio Program" "It has become the popular football song of the University and one of the best known collegiate songs in the District."] A May 18, 1933, editorial in The Tower states: "For two years now the university has been in possession, so to speak, of what has been described in these columns for some time as "one of the school's most urgent needs." [This refers to the need for an official fight song.] We refer, of course, to the "C. U. Marching song,"  a Catholic University composition throughout.

"During the two years of the song's exsistence, one of the authors, and now its sole owner, has spent considerable time and money to further the compositions's popularity, both among the students and outside the confines of the campus. The Tower is pleased to say that his efforts have met with success. But what is sad to state is the fact that officially, or even unofficially, the University has taken no part in the efforts to popularize the number." In October of 1933, Paul D. H. Leman wrote the "Flying Cardinals March," which was declared the official marching song of CUA.

It is not known if an accompaniment was ever notated for this work. The copy held by the Copyright office is just the tune with lyrics, lacking even chord symbols. The above Tower Article mentions the premiere was sung by a (men's) double quartet with the composer at the piano. One would think a vocal arrangement would have been made, but it is conceivable that they simple sang the tune in unison accompanied by the piano. The work was broadcast over WOL radio by the Glee Club at Union Station in Nov 16, 1934. The Tower lists Conrad Bernier, music instructor, as the accompanist. Was the accompaniment notated for him or could he have improvised an accompaniment. Bernier was well known in later years as an excellent organist and improviser. Perhaps the double quartet sang the work unaccompanied but that seems unlikely since in the past they had been accompanied by a piano. One hopes the original accompaniment can one day be found, or the arrangement used by the Fred Waring Band. Until then Maurice Saylor has written an accompaniment for piano and unison voices and another for wind band.

This song was difficult to track down. We saw mentions of it in 1930s Tower articles. We found that lyricist Clem Ducy's papers had been accepted by and then weeded from two archives, one in Wyoming and one in Colorado, before finally ending up with his great-niece, notable American author and historian Kate Kelly. Delighted that someone was interested in her great-uncle's lyrics, she offered to go through the boxes of Ducy's papers, but was unable to find the song or anything about its history. Seeing that the work was copyrighted in 1931, we requested a copy of the music from the Library of Congress. They sent what they had, which was a tune with lyrics (no accompaniment). Maurice Saylor has written a new accompaniment (2011) in the appropriate style so that the piece can be performed.

Performed by the cast of "Songs of Old CUA" with the CUA Wind Ensemble (John Mitchell, conductor)