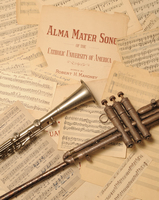 Historic Music of CUA is a collection of music written to celebrate the University and inspire its community in sports, social events, and ceremonial occasions. This music is generally not intended for concert performance, but rather for the untrained man on the street to perform. A future project will focus on the music written for liturgical and concert performances.

These pages attempt to collect and make available scores (in both historic and modern editions), parts, and recordings, as well as histories of the pieces and biographies of those involved in the creation of the works.

Additionally, these pages collect texts of cheers used at sporting events. The performing traditions of these cheers are lost, but it is assumed that some may still be recalled by those who used them. If that is the case, it is possible to notate the cheers to document the performing tradition, thereby preserving them for the future.

The earliest work in this collection dates from 1916 and the latest from 1993. We hope that bringing these works to light will encourage others to build on this tradition. It is possible, even likely, that undiscovered works still exist either on paper, on recording, or in the institutional memory of the CUA community. Those who know or are aware of such songs and cheers are encouraged to contact CUA's Music Librarian, Maurice Saylor (Saylor@cua.edu).

To view the songs, use the links to the right or click on "Next Page" below.

← Learn About the Music
Next Page: