American Catholic History Classroom > Exhibits > Turning Toward a New Century: The Catholic Church's Encounter with American Culture at the Turn of the Century > A Diverse Church > African Americans 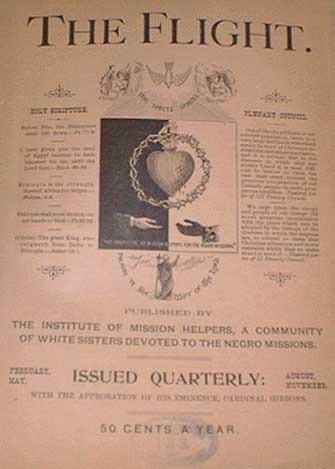 At the turn of the century, only about 100,000 to 200,000 of the over four million African Americans were Catholics. Yet the roots of these Black Catholics ran deep, often stretching back to the origins of the church itself in colonial Maryland or French Louisiana. Like African Americans of all religious backgrounds, they suffered severely from prejudice and discrimination. The vast majority lived in the south and worshipped in segregated churches or from designated areas in the back or galleries of white-run churches.

They also had few of their own priests. In 1886, Father Augustus Tolton was ordained a priest in Rome. He was the first self identified African American to be ordained a priest. He returned to the United States as a hero to American Black Catholics but suffered indifference and hostility from many white Catholics while working in the Alton Diocese and Chicago Archdiocese. Laboring hard in difficult circumstances, he died at the young age of forty-three in 1897. He had few successors; by 1930 there were still only three Black priests in the United States.

Black Catholics did have allies in the white Catholic community. John Boyle O'Reilly of the Boston Pilot and John Ireland, Archbishop of St. Paul, condemned discrimination against Blacks in the 1880s. Several religious congregations, the Holy Ghost Fathers, the Society of the Divine Word, and the Josephites, also began to work among African Americans in the late nineteenth century.