From East to West

In the late nineteenth century, the United States was booming. From 1870 to 1900 eight new states were admitted to the union; 430 million acres were occupied; and 225 million acres put to the plow. That was more acreage occupied or placed in cultivation than in America's first 270 years. Hamlets became cities and cities became world class metropolises. Denver, for example, only founded in 1858, became a city in 1861, and grew from 6,000 residents in the early 1860s to over 130,000 by 1900. San Francisco was a sleepy mission town of roughly a thousand people in 1849; just fifty years later it had over 340,000 citizens. Chicago was incorporated in 1833 with less than 350 people; by 1900 it was the colossus of the west with nearly 1.7 million people.

As the nation expanded across the continent the church followed - or in many cases, as in parts of the southwest, met the United States as it moved west. From 1870 to 1900, thirty-seven new dioceses were formed, eighteen of them west of the Mississippi.

But it was not the nation's spread over the continent or even its multiplying population that was the marvel. It was the American economy. Powered by a "second industrial revolution," the United States pushed its way to the front rank of the world's economic powers. By the early twentieth century, it had more miles of railroad, mined more coal, made more steel, and grew more wheat and raised more beef than any other nation on earth. 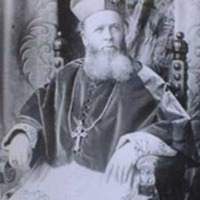 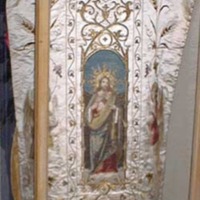 Chasuble Worn by Bishop Edward Dunne at the Consecration of the Cathedral of Dallas, 1893, The Catholic University of America
Museum Collection 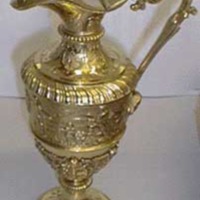 Cruets from Mass Set Presented to Archbishop Samuel Eccleston during the Sixth Provincial Council, 1846, Residence of the Archbishop of Baltimore 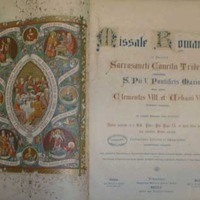 Missale Romanum, London: Dulau and Company, 1861, Gift of the Archdiocese of Baltimore, 1924, The Catholic University of America Rare Books Collection 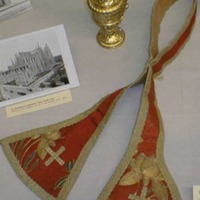 ← From East to West
Next Page: