All these changes, in the American economy and society, in the composition of the church's population, and the leadership of the church, combined to make the question what does it mean to be American and Catholic more pressing and urgent. In 1884 the bishops of the United States met in Baltimore and addressed a number of important issues, but in turbulent times much remained unresolved. Over the course of the 1880s and 1890s American Catholics debated a series of issues focusing on ethnic diversity in the church, Catholic relations with non-Catholics, and the Church's moral teachings on the American economy, that were ultimately rooted in the larger question of what does it mean to be Catholic and American.

Often these debates pitted Bishop John J. Keane, Bishop of Richmond and later the first rector of Catholic University, Archbishop John Ireland of St. Paul, and Cardinal James Gibbons of Baltimore against Archbishop Michael Corrigan of New York, Bishop Bernard McQuaid of Rochester and German American bishops like Archbishop Frederick Katzer of Milwaukee. This era in American Catholic history has been well studied. Indeed, probably none has been studied more, but it is still hard to generalize about what divided these two parties. Ireland, Keane and Gibbons are often called liberals and their opponents, Corrigan and McQuaid, conservatives, but some historians find these terms confusing and others doubt their consistency. Ireland, for example, strongly defended the great industrial capitalists of the era like James J. Hill, and celebrated America's 'mission' of colonial expansion around the world. The two groups are also sometimes called 'Americanists' and 'anti-Americanists,' but this too is not very helpful. The American born, so called 'anti-Americanist,' McQuaid, for example, was as insistent on his American patriotism and the need to Americanize immigrants as the Irish born 'Americanists,' Keane and Ireland. In general, Keane, Ireland and Gibbons were optimists both about the church's encounter with America and America's role in the future of Catholicism; Corrigan, McQuaid and others were more cautious about that encounter because they worried that church essentials might be compromised in accommodations to American life. Historian Christopher Kauffman suggests that Gibbons, Ireland and Keane might best be called transformationists, "since they believed that as a result of the encounter between Catholicism and American culture both experienced a positive change," and Corrigan, McQuaid and Katzer called preservationists, "reluctant to risk the integrity of the faith in a democratic, pluralist society." 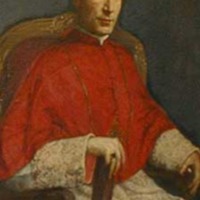 Portrait of James Cardinal Gibbons, 1892
by A. Muller-Ury, The Catholic University of America
Museum Collection 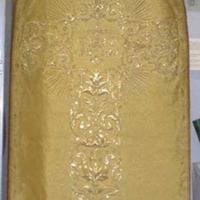 Chasuble from a set of Ceremonial Vestments Worn by James Cardinal Gibbons. Created in Paris for Cardinal Gibbons, this heavily-brocaded garment is made of gold. Gibbons wore the set of high pontifical vestments on high holy days and special events. Basilica of the Assumption