American Catholic History Classroom > Exhibits > Turning Toward a New Century: The Catholic Church's Encounter with American Culture at the Turn of the Century > A New Generation > The Civil War 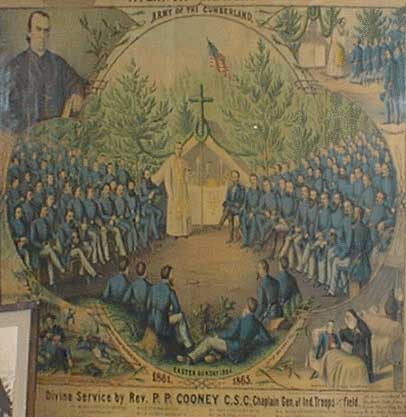 Civil War Mass print showing the service of Rev. P.P. Cooney, C.S.C. With the Army of the Cumberland, The Catholic University of America, E.W.J. Lindesmith Collection

The Civil War was an important step in the Americanization of Catholics. Besieged and suspected by nativist Know Nothings just before the war, Catholic soldiers, chaplains and nuns proved their courage and loyalty to non-Catholic skeptics through their heroism on the war's battlefields and in hospitals. It is hard to know how many Catholics participated in the war, but certainly many of the half million foreign born soldiers were Catholics. Several Irish American units, the Irish Brigade, in
particular, won fame for their charges at Antietam, Fredericksburg and Gettysburg. In addition to impressing erstwhile enemies, the war experience had a powerful effect on many of the Catholics who served in it. Catholics served on both sides of the conflict and even most Catholics in the north were, at best, ambivalent and, at worst, violently opposed to the abolition of slavery, the war's ultimate cause. By the 1880s, most Catholics remembered the war as an important test - and proof - of their patriotic devotion. In 1889, William Rosecrans, a Catholic (his brother was a bishop) who commanded the Army of the Cumberland during the war, addressed Archbishop John Ireland and Ireland's fellow veterans of the 5th Minnesota and recalled: "Yes, you were with me at the Battle of the Corinth...We were...the patriots, dying and living, who offered up their best that this nation might live."

← A New Generation
Next Page:

The Devotional Revolution of the Nineteenth Century →