American Catholic History Classroom > Exhibits > Turning Toward a New Century: The Catholic Church's Encounter with American Culture at the Turn of the Century > Issues in the Encounter > Relations with non Catholics: The Chicago Fair and the World Parliament of Religions

Relations with non Catholics: The Chicago Fair and the World Parliament of Religions 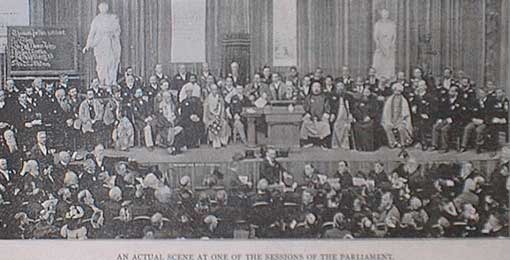 Just as important in the late nineteenth century as the issue of how Catholics of different nationalities related to each other in one Church, was the question of how Catholics would relate to those outside the church. This was an increasingly pressing issue as Catholic laymen and women moved up the social ladder and out of their immigrant ghettoes into new mixed neighborhoods and the Church itself became such an increasingly powerful force in many cities that it could not be ignored.

In 1893, the city of Chicago hosted the Columbian Exposition, a spectacular world's fair along the Midway on the city's south side. American Catholics were eager to be represented at the Fair. A group of laymen convened the Catholic Columbian Congress there in September of 1893. The Congress was patterned after an earlier meeting of laymen in Baltimore in 1889. Catholics also mounted a Catholic Educational Exhibition at the Fair which featured pictures, artifacts, pamphlets and books from Catholic institutions around the country. A Catholic School for African American children from Pine Bluff, Arkansas displayed dresses, embroidery and furnishings made by the children, as well as their history, science and spelling textbooks.

More controversial was Catholic participation in the Fair's World Parliament of Religions. Hoping to capitalize on the fair's popularity and media attention for the cause of religion, a group of Protestant clergymen organized the parliament at the fair in September of 1893. Bishop Keane felt that Catholics could not afford to pass up the opportunity to attend the parliament for it provided an unparalleled forum for speaking to all Americans; he eventually came to see the meeting as a harbinger of a new age of Christian unity as old differences "are being obliterated." Keane led a day long Catholic session and he and Gibbons later spoke at a general session of the Parliament. Bishop McQuaid, on the other hand, believed that Catholic participation was a dangerous cheapening of the church's claims to be the one true church: "The Catholic Church, the religion of Christ, with its unerring teaching" he said, was put on a par "with every pretence of religion...to the lowest form of evangelicalism and infidelity." The Archbishop of Canterbury of the Anglican church had felt the same way and had also refused to participate in the Parliament.

← Issues in the Encounter
Next Page:

The Social Question: Knights of Labor and the Church →