American Catholic History Classroom > Exhibits > Turning Toward a New Century: The Catholic Church's Encounter with American Culture at the Turn of the Century > A Diverse Church > Latino Americans 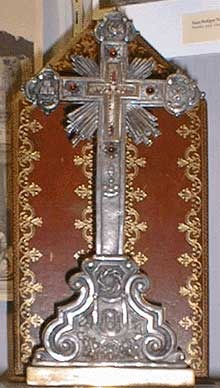 Reliquary and Tabernacle, ca. 1750, From the American Southwest or Mexico, The Catholic University of America, James A. Magner Museum Collection

Catholicism's deepest roots in what became the United States lie in the Southwest among the Latino or Hispanic Americans who settled that region. The Church was first established there as far back as the sixteenth century, but priests were always scarce in an area so vast and so far from the centers of Spain's American empire or later the Republic of Mexico. Vibrant lay Catholic traditions thus emerged to serve the spiritual needs of the people on this Spanish frontier. Male confraternities
flourished in much of New Mexico. These associations helped organize richly elaborate commemorations of Christ's passion during Holy Week and feast day celebrations during other times of the year. In the region around Tucson, in Arizona, the feasts of San Isidro and San Juan (St. John the Baptist) were especially important. Women played a critical role in community religious life as well, particularly during the month of May, the month of Mary, when they organized and participated in prayer meetings honoring the Virgin Mother.

After the United States took over much of the southwest following the war with Mexico, the Vatican carved up these new parts of the United States into new dioceses: Galveston, the first diocese in Texas in 1847; and the largest Santa Fe, New Mexico in 1853 (made an archdiocese in 1875). Despite the new diocesan structure, a shortage of priests continued to plague the region. The early bishops of Santa Fe, John B. Lamy and John B. Salpointe, of French origin themselves, and the new bishops in Texas brought in priests from all over Europe and the eastern United States to meet their needs. These clerical newcomers labored tirelessly in their new and difficult work. Bishop, later Archbishop, Lamy was especially heroic in travelling long distances over the rugged terrain of New Mexico to minister to his far flung flock. Yet tensions sometimes arose between these priests and the Latino laity, who wished to preserve the time-honored societies and devotions that they had maintained for centuries.

← Immigrants from Southern and Eastern Europe
Next Page: