American Catholic History Classroom > Exhibits > Turning Toward a New Century: The Catholic Church's Encounter with American Culture at the Turn of the Century > Epilogue > Epilogue 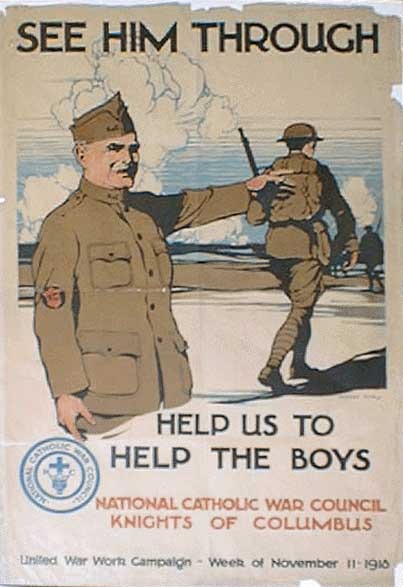 In 1899, Leo XIII condemned a heresy he termed 'Americanism' in an apostolic letter, Testem Benevolentiae. Leo's cautions in this letter, and revivals of anti Catholicism in the American Protective Association of the 1890s, Tom Watson's Watson's Magazine and Wilbur Phelps' Menace in the 1910s, and the Ku Klux Klan in the 1920s, chilled Catholic relations with non-Catholics and reinvigorated the Catholic commitment to building their own institutions and community. William O'Connell, who became Archbishop of Boston in 1907 and was made a cardinal in 1911, came to embody this new 'militant and triumphant' Catholic spirit.

But Leo's letter did not, nor was it meant to, end the continuing efforts of Catholics in the United States to work through the meanings of their Catholic faith and American identity. Church leaders continued to assert the essential harmony between the Catholic faith and American citizenship. Indeed, if anything, American patriotism became an even more intense and essential element of Catholic life in the twentieth century, prompted by two world wars and a cold war, and eased by an erosion of ethnic sentiment caused by declining immigration.

During World War I, the Knights of Columbus raised millions of dollars and established facilities throughout France and America to serve Catholic soldiers and sailors. The bishops of the United States also established the National Catholic War Council to mobilize the Church in behalf of the American war effort. Led by Rev. John J. Burke, the War Council not only helped servicemen, but encouraged foreign born Catholic immigrants to become American citizens and all American Catholics to support the war effort.

In 1938, prompted by a letter from Pope Pius XI to Catholic University, the bishops of the United States ordered the University to establish a Commission on American Citizenship to educate Catholic children about the "true nature of democracy." The Commission would publish books, pamphlets, and even comic books reaching millions of children and young adults over the next twenty or more years.

Catholics also continued to engage the problems of an industrial economy. Indeed, if anything, Catholic social activism became more confident and powerful in the twentieth century than it had ever been in the nineteenth. In 1919, American bishops on the board of the War Council would issue the "Bishop's Program for Social Reconstruction," a bold call for sweeping reform of the American economy. Monsignor John A. Ryan of Catholic University, who wrote the Bishop's Program, became the principal theorist of this new Catholic social activism. Others from the University like Bishop Francis Haas, Monsignor George Higgins, and Monsignor Paul Hanly Furfey carried on that tradition through the twentieth century.