American Catholic History Classroom > Exhibits > Turning Toward a New Century: The Catholic Church's Encounter with American Culture at the Turn of the Century > From East to West > Myles Poore O 'Connor 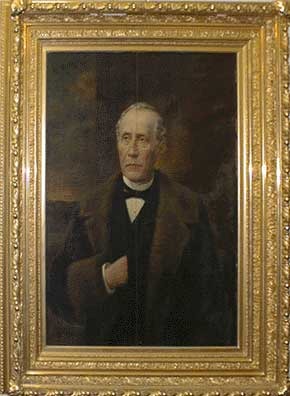 Myles Poore O'Connor embodied Catholic success in the booming economies of the Far West. Born in Ireland in 1823, O'Connor emigrated first to St. Louis where he was trained in the law. Upon hearing of the discovery of gold in California in 1849, he set out for the West, traveling overland by mule team across the plains and over the Rockies. In California, he quickly became rich as a lawyer for mining interests and bought a palatial home in downtown San Francisco. Other Catholics like the Phelans and the Donahues won rapid success in the West as well during this period. Western cities had no established Protestant elites and their economies were dynamic; they were, then, rich with opportunities for ambitious Catholics like O'Connor. Myles O'Connor was extraordinarily generous with his new found riches, donating hundreds of thousands of dollars to Catholic religious orders, such as the Sisters of Notre Dame and the Jesuits, and establishing a chair in Canon Law at Catholic University for his good friend, John J. Keane, the University's first rector.

← From East to West
Next Page: