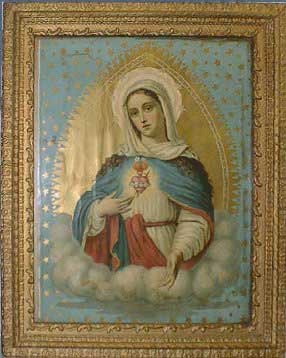 Painting of Mary, Image originally part of a private collection donated to the museum through the Department of Rare Books, The Catholic University of America Museum Collection

Born in America, proud of their American birthright, avid participants in American culture, and moving into the middle class (the term, "lace curtain Irish" was coined in the 1890s) the new generation was creating a new kind of Catholic: an American Catholic. For them, their faith was as important as their American nationality, but their religious life was often different than the traditional peasant Catholicism their parents had known in the old country. They were particularly drawn to the devotions recently revived and encouraged by Rome, such as the Sacred Heart, St. Joseph, or St. Anthony and new nineteenth century devotions like Our Lady of Lourdes. They also flocked to organizations that helped them merge their American and Catholic identities, including the Knights of Columbus, the Catholic Total Abstinence Union of America, and the Catholic Daughters of America.

← A New Generation
Next Page: