American Catholic History Classroom > Exhibits > Turning Toward a New Century: The Catholic Church's Encounter with American Culture at the Turn of the Century > A New Generation > The Devotional Revolution of the Nineteenth Century

The Devotional Revolution of the Nineteenth Century 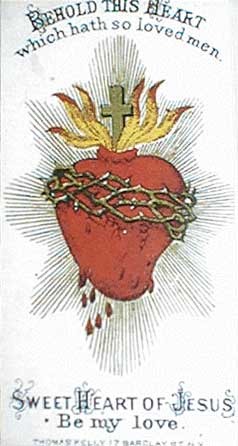 Sacred and Immaculate Heart Materials. Images originally part of a private collection donated to the museum through the Department of Rare Books; Holy Cards part of collection in Rare Books, some of which were found tucked away in books. The Catholic University of America Museum Collection and Rare Books Collection

In the middle and late nineteenth century, the Church not only in Ireland, but around the world, was caught up in a 'devotional revolution.' Popes Pius IX and Leo XIII encouraged it by publicizing devotions, raising the status of their feast days, offering special indulgences for their practice and blessings for their sodalities. Changes in communication technologies, cheaper and faster printing and productions of lithographs, aided this revolution The result was that while national traditions of devotions remained vital, certain devotions became more broadly popular across national, ethnic and racial lines than ever before. It was an era of 'romanization' and 'standardization' - but also democratization - of devotions, historians note. Many immigrants came to America steeped in such devotions like the Sacred Heart along with devotions to national patrons and village saints. These broadly promoted and popular devotions that crossed ethnic boundaries would become increasingly important, however, to new American-born generations as they moved out of immigrant ghettoes and embraced a faith that could speak to Catholics of every ethnic ancestry.

Devotion to heart of Jesus emerged gradually in the medieval era, but became especially popular after St. Margaret Mary Alacoque, a French nun, encouraged it in the seventeenth century.

In 1856, Pope Pius IX extended the feast to the universal Church and later Leo XIII raised its rank. Through the Apostleship of Prayer, approved by the Vatican in 1854, groups, families and communities consecrated themselves to the Sacred Heart of Jesus. In 1899, Leo XIII, in his encyclical, Annum Sacrum, consecrated the world to the Sacred Heart.

In the United States devotion to the Sacred Heart dated back to the late eighteenth century, but did not become broadly popular until the 1870s when Jesuit and other priests sought to democratize it through parish missions and the Jesuit magazine, Messenger of the Sacred Heart.

Devotion to the heart of Jesus has usually emphasized his suffering heart. Dating back to the seventeenth century, then, images of the Sacred Heart have often depicted it with a crown of thorns and a bleeding wound.

In 1855, Pope Pius IX approved an office and a mass of the "most pure heart of Mary." Before that, the devotion had been little noticed in America but now it began to flourish there.

Devotion to the heart of Mary emphasized her pure or 'immaculate' heart and became linked to Mary's Immaculate Conception.

← The Civil War
Next Page: