American Catholic History Classroom > Exhibits > Turning Toward a New Century: The Catholic Church's Encounter with American Culture at the Turn of the Century > A New Generation > Knights of Columbus 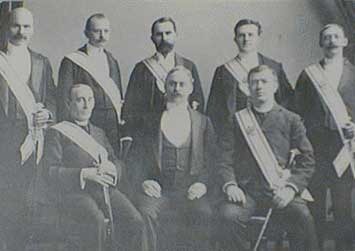 Knights of Columbus, The Catholic University of America
Archives Collection

In February of 1882, Father Michael J. McGivney, a second generation Irish American priest gathered sixty men, most of them also American-born Irish, in the basement of St. Mary's Church in New Haven, Connecticut. The men signed the register for a new, 'original' organization, the Knights of Columbus, and gave birth to an American Catholic phenomenon. There were a number of Catholic fraternal and insurance societies founded at the turn of century, the Catholic Knights of America, the Massachusetts Catholic Order of Foresters (1879), and the Catholic Benevolent Legion (1881). Many of these were like the Knights, 'post ethnic' societies, appealing to young men, born or at least brought up, in the United States, for whom America was home and the old country, whether Ireland, Germany or French Canada, was their parent's memory. None of these societies was more fiercely patriotic, so passionately assimilationist, and yet devoted to Catholicism than the Knights of Columbus, and thus none was more successful in appealing to emerging American-born generations of not only Irish but other Catholic ethnics. By 1899 there were 40,000 Knights of Columbus in 300 councils; by 1909 there were 230,000 in 1300 councils.

Ceremonial for the Fourth Degree Themes of Citizenship

Proud in the olden days was the boast: "I am a Roman Catholic;" prouder yet today is the boast, " I
am an American citizen;" but the proudest boast of all times is ours to make, "I am an American
Catholic citizen."   Knights of Columbus

A New Generation of Women

As sharp observers like Finley Peter Dunne's Mr. Dooley often noted, American born daughters of immigrants played as important a role in defining standards of success and respectability among the new Catholic middle class as their brothers did. Changes in the economy in the late nineteenth century opened up vast numbers of new white collar jobs to women, such as stenographers, sales clerks, and telephone operators. In some big northern cities lay Catholic women - the vast majority of them American born - dominated the ranks of public school teachers and administrators. Some of these women never married, preferring to follow their professions. Those who did wed brought their ambitions and refinements with them to their families and passed them on to their children.

← The Devotional Revolution of the Nineteenth Century
Next Page: