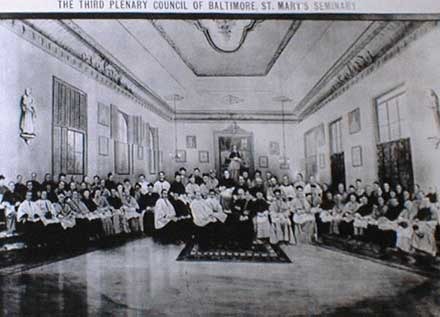 In 1884, the bishops of the United States gathered in Baltimore and in an historic meeting took a number of significant steps. They agreed, for example, that every parish in America should try to build a parochial school within two years of the Plenary Council's closing. They asked the Holy See to approve a new Catholic university for America, and they approved a uniform, English language catechism for the United States, the legendary Baltimore Catechism.

The Society of the Missionary Priests of St. Paul the Apostle

The Society of the Missionary Priests of St. Paul the Apostle was founded by Issac Hecker in 1858. Hecker and many of the early Paulists were converts to Catholicism. They were convinced of the essential harmony between the Catholic faith and American ideals and thus the potential for non-Catholic Americans to appreciate and ultimately embrace Catholicism. The Paulists had a strong influence on Archbishop John J. Keane and Archbishop John Ireland: Ireland would call Hecker, "the flower of American priesthood."

Issues in the Encounter →