American Catholic History Classroom > Exhibits > Turning Toward a New Century: The Catholic Church's Encounter with American Culture at the Turn of the Century > A Diverse Church > Native Americans 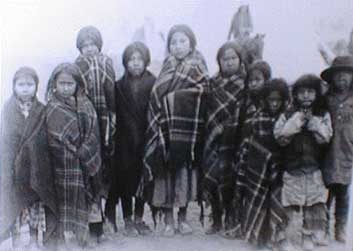 Missions to Native Americans extended back to the earliest days of the French and Spanish settlements in North America. In the nineteenth century several missionaries, among them Bishop Frederic Baraga, Rev. Samuel Mazzuchelli, Rev. Pierre De Smet, and Rev. John Brouillet, carried on missionary work with native peoples from the Chippewa in Michigan to the Yakima in Washington state. In the last quarter of the nineteenth century, Catholic missionary activity expanded enormously, from twenty priests, seven small schools and 25,000 Catholic Native Americans to 140 priests, 60 schools and 50,000 Catholic Natives Americans.

If the Catholic missions prospered at the end of the nineteenth century many Native Americans did not. Encroaching white settlement touched off the wars between the United States and the Native American peoples from the Sioux in the north to the Nez Perce in the West to the Apache in the southwest. By the 1890s virtually all Native American resistance had been broken. In 1887, the government passed the Dawes Act, which allowed whites to take up the 'surplus' reserved lands of Native Americans. The act, historian Jacqueline Peterson suggests, resulted in an estimated loss of 500 million acres by tribes of their reserved lands.

Most American Catholics, like most Americans, believed that Native Americans would best be served by casting off old customs and assimilating into the American mainstream. Catholic 'Indian' schools in the west carried out this assimilationist policy. Catholic missionaries were often caught between the government and Native Americans as lands were stripped away from native peoples. Rev. Pierre De Smet was a good example. In the 1850s and 1860s he helped the United States government negotiate treaties with the Sioux. Noting the seemingly inexorable waves of white settlers flooding the west, he believed that native peoples had no recourse but to seek the protection of the American government. Yet as De Smet grew older he became more and more disillusioned with the government as it supported further and further encroachments on the territories of the peoples he loved.

In 1891, the Salish people were forced from their longtime lands in Montana's Bitterroot Valley. Before leaving they conducted an all night prayer vigil at St. Mary's mission there. On the march to their new reservation they chanted the Dies Irae, "the Days of Wrath."

Note: Photograph taken by an amateur photographer, Father Eli Washington John Lindesmith. In the 1880s, Lindesmith served as a chaplain for the Fifth Army Regiment at Fort Keogh in Montana and a missionary to the Crow, Northern Cheyenne and Sioux peoples of Montana.