Raul Anguiano (1915-2006) was born in Guadalajara, Mexico on February 26, 1915. After moving to Mexico City in 1934, he began teaching art at La Esmeralda academy and the National Autonomous University of Mexico (UNAM) School of Art. In addition to his paintings and prints, Anguiano is well known as a muralist, and was commissioned to create them for A. Carrillo School in Mexico City, the Mayan Hall in the National Museum of Anthropology, and the Attorney General’s Office. In 1982 he became a full member of Mexico City's Academy of Arts, and in 1993, Creator Emeritus of National System to the Creators of Art. 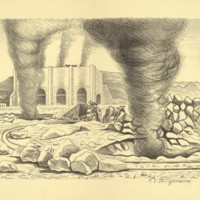