Fred Geary (1894-1955) was born in Carrollton, Missouri. Known as a painter and block printer, Geary studied at Jewell College in Kansas City followed by the Kansas City Art Institute. Geary was responsible for the sand painting design mural at the El Navajo Hotel in Gallup, New Mexico. He was a member of the Kansas City Woodcut Society, and some of the venues to feature his work included the Museum of Modern Art, New York, and the Pennsylvania Academy of the Fine Arts.

Resource Cited:
Falk, Peter Hastings, Who Was Who in American Art, 1985 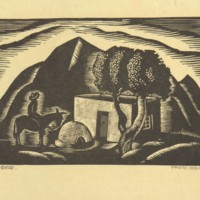