Ralston Crawford (1906-1978) was an American painter, printmaker, and photographer. He was born in Canada in 1906. After working briefly at the Walt Disney Studio in California, he moved to Philadelphia where he studied at the Pennsylvania Academy of the Fine Arts and at the Barnes Foundation in Merion Station. He also studied in academies in Paris, France in the 1930s. His work was influenced by Cubism and Precisionism, which led to much of his work being abstract in nature. 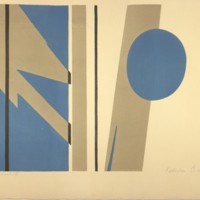