Edward August Landon (1911-1984) was born in Hartford, Connecticut and studied at the Hartford Art School. He began his career as a painter, but became increasingly interested in the silkscreen process. He was one of the founding members of the National Serigraph Society and went on to become editor of their publication the ‘Serigraph Quarterly.’ Among his numerous professional memberships were with the Philadelphia Print Club, the American Color Print Society, and the American Artists Congress.

Resources Cited:
Falk, Peter Hastings, Who Was Who in American Art, 1985 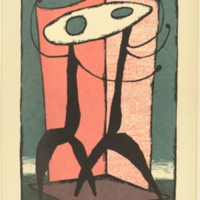